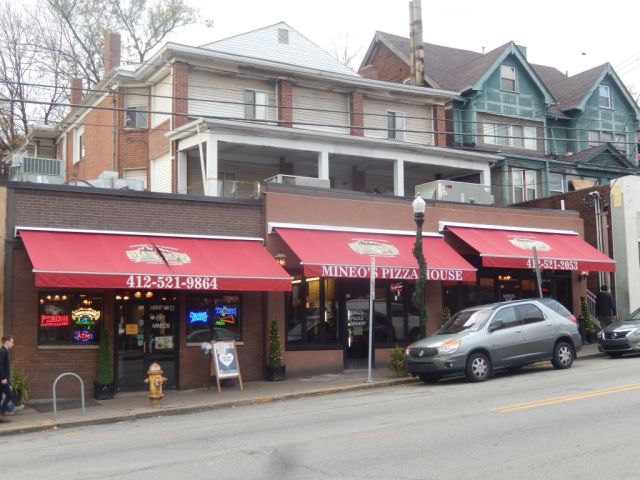 When my oldest son, The Philosopher, moved to Pittsburgh to advance his studies, I wasted no time researching the area for new pizza to discover. Hands down, the place most recommended was Mineo’s Pizza House. After checking it out on-line, it certainly had the look, feel and history of a pizza joint that the Snob would love. Sadly, on my first short trip to the city, I was shut out when they were closed in observance of Labor Day. This time out, although it was the Saturday after Thanksgiving, everything worked out just as I had hoped it would. And more.

So happens that this day was also a holiday, Small Business Saturday. This provided the benefit of turning off the parking meters for the day when my family crew and I parked just about a block away from Mineo’s original Squirrel Hill location. (They have another one a little further south in the Mt. Lebanon part of town.)

Our plans for the day had earlier taking an abrupt halt when I received a bad update about my Mom’s health. We were all hurt by the news would need to leave for home in the morning. However, collectively, we thought that some joy was in order. And not only did that mean pizza at Mineo’s, but I was gobsmacked to see that another place on my Pittsburgh bucket list, the world famous Jerry’s Records, was right next door.

From the outside, I was surprised to see that Mineo’s had expanded from the vintage picture of the location at their website. They now occupied three spaces with pizza (and Italian food) on the left and new additions for a bar on the far right and an ice cream shop in the middle.

With our team taking a table in front, I went to the back counter and ordered each of us a plain cheese slice (a deal at only $1.80 each). Still a bit bubbly after getting to browse the vinyl next store at Jerry’s, my pizza excitement began to build as I made some small talk with the young lad at the counter. He told me he’s been eating the pizza here since he was three!

Well, the slices only took about two minutes to warm up, and the Snob was ultimately quite impressed. I would describe Mineo’s slice pizza as being fantastically different: small, crisp, cheesy and chewy. It’s not a clone of something you’d find on the streets of New York, but it’s uniquely original and wonderfully delicious. It’s an old family recipe, and each pie is cooked with tender loving care and respect for its tradition since 1958. 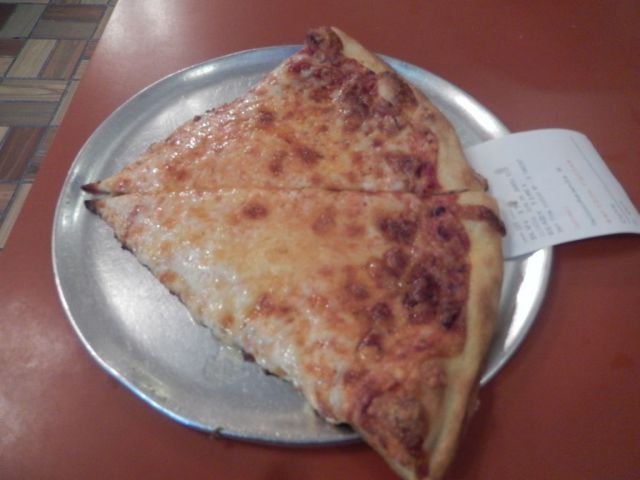 I’ll start with the crust which was absolutely fabulous. It was well-charred on the bottom to the point of a perfect balance of still remaining chewy while being crisp. Perhaps, it was cheesier than the norm (possibly a Pittsburgh thing), but far short from being at fault. The tomato sauce had a great taste, and all in all everything blended together just perfectly, including a healthy dose of oregano and a slight coat of oil on top. Man—these cute little slices just worked! Since they were a little smaller than usual, all that meant was we had to go back for another round!

This great land of our is full of family-owned businesses that continue to pass along a tradition of originality and excellence from generation to generation. (Mineo’s pizza house is on its third!) All I have to say about this place is that I’ll be coming back again and again. Mineo’s Pizza House is a true American classic, and the city of Pittsburgh should be proud.

Oh yeah, check out the cool pizza quilt that was hanging on the wall. 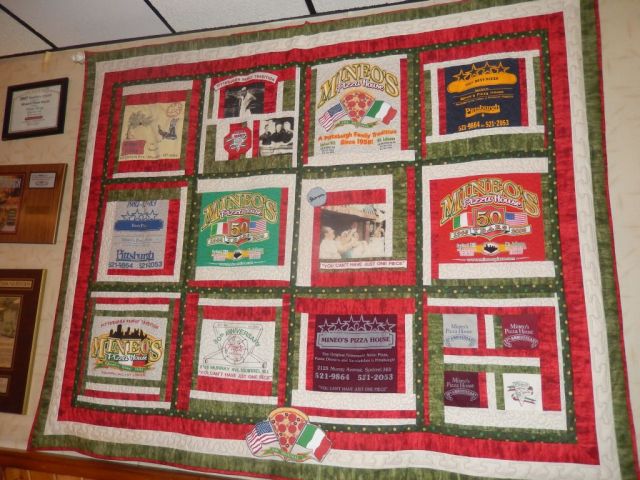