During down time between trips around this fine nation of ours, I try to keep this blog alive with reports on pizza joints my home town greater Nashville area. Always on the hunt to find some place I have missed, sometimes they just pop up out of nowhere and find me. Such was the case recently when I came upon a pizza delivery car for Bellagio Pizza & Subs right outside my Green Hills office.

Clueless about Bellagio, my IPhone-search revealed that it was tucked a bit out of the way off West End Avenue near Centennial Park. I was surprised to learn that they have been around for quite some time. While my investigation revealed no signs that their pizza would be anything spectacular, the Yelp community sure gave them high grades for being a top-notch pizza deliverer. The consensus was that they got them out fast and knew how to keep them hot.

To get this one on the books, I moved my weekly lunch pow-wow with my friend the Pelikan to some Friday afternoon fun at Bellagio. I also invited our mutual friend Pizza Buddy to join the festivities. We three converged on the place just before Gary Cooper time (“High Noon”) and were truly blessed to grab some comfortably-cushioned chairs at one of the two shaded patio tables outside their store front. With the peace and tranquility we were about to enjoy, they could have served us ketchup on cardboard and we’d have been happy!

Aside from pizza, you will also find sandwiches and salads at Bellagio. The Snob likes to treat for work like this, so after securing our space, I went inside to order us a big plain cheese pizza (16-inch large for $12.99) and a big salad. Space inside was scarce, and I got a tad impatient as the person at the counter completed a rather lengthy phone order before getting to me. 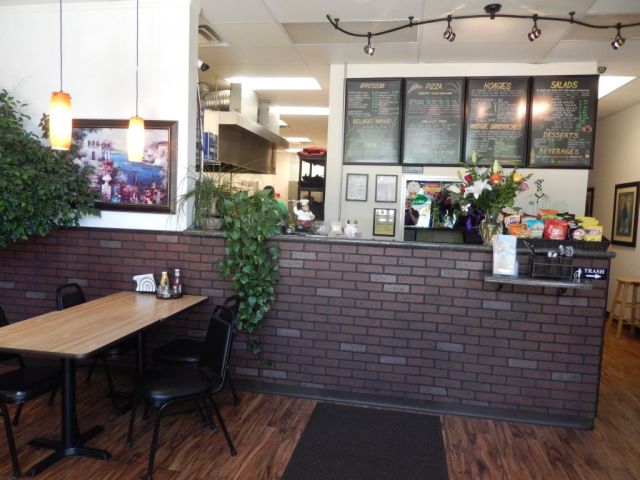 My salad came first, and the sight of a yellow cheese covering at an Italian place was a possible warning about what was yet to come. It was.

The pizza was way too thick, over-cheesed and doughy. It was marred with some unfortunate burn marks on the cheese that was poorly-blended with the tomato sauce. There was also a covering of extreme grease most likely resulting from the quantity (too much) and quality (lesser) of the cheese. It also had a soft and droopy crust completely devoid of any char scoring way low on the crispy meter. I selectively ate the skinnier slices so I would have less cheese to deal with. I finally had enough and quit since this pie was just too heavy of an eating experience.

Although somewhat indifferent, Pelikan was kind in saying he thought it was OK. On the other hand, Pizza Buddy came up with a clever observation that this was a pizza to be rated on a different scale. My interpretation of what he meant was that it was better than average on an amateur scale, but not worthy of a ranking among the pros. Pelikan laughingly paraphrased “It’s on the mid-scale of unspectacular pizza”! Being kind myself, I added that I certainly have had a lot worse than this.

While far from the best pizza I’ve had in Music City, the weather on the patio may very well have made it one of my most enjoyable pizza dining experiences. I doubt though that this will be enough to get me to go back. But if you live around Bellagio and would like a decent hot pizza delivered fast to your door, it might be worth it to give them a call.