Recently, it dawned on me how little pizza I eat at home, instead saving up my calories for my travels. Then again, there are those times when it’s a been long time between trips, and I start savoring its taste as well as my desire to explore a new place. All this leads up to my first visit to the nearby Franklin location of Roma Pizza & Pasta.

Roma has 15 locations in the Greater Nashville area and has a reputation for delivery and filling your mailbox with coupons flashing their familiar colorful logo. My first shot at visiting a Roma was years ago when I was looking for a quick dinner after work in Green Hills. However, this attempt to dine at their location behind the Starbucks on Hillsboro Road was thwarted when I discovered their tiny place was takeout only.

I first toyed with the idea of getting a delivery. Instead, one Sunday evening, I decided to head over to pick a pie up myself which would give me the chance to gobble down a few fresh slices on site.

Roma is in a strip center on Royal Oaks just off Highway 96 which places it in proximity of perhaps the busiest intersection in all of Franklin. While I had not heard anything bad about Roma, I had not heard anything good either. Despite its prominence and longevity (since 1999), such silence was a concern. In doing my homework through the stack of coupon mailers I had accumulated on my desk, I did discover that they offered both hand-tossed and thin crust options. Seeing little appeal in gobs of runny cheese stretching off a pizza, their photos also did not wet my appetite.

Things were quite slow at Roma on this early Sunday evening when I pulled into a near-empty parking lot. Walking inside, I was quite shocked at how spartan this place was. Aside from the counter in the back and four tables, the room was mostly empty space, and there was little on the walls other than the yellow paint. 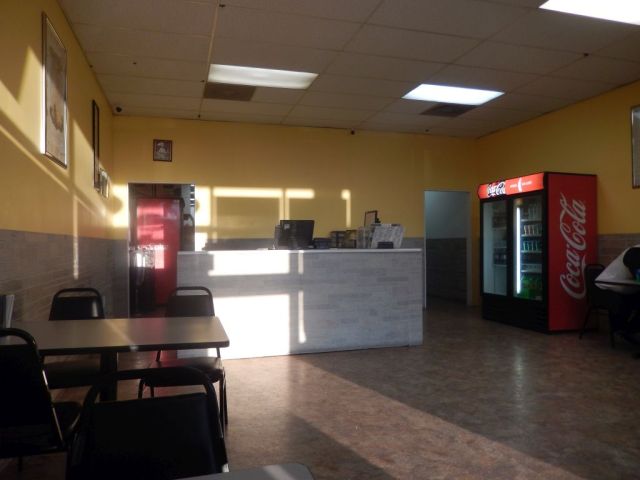 I ordered my large “thin crust” pie “to go” for the bargain price of only $8.99. I passed on the two toppings that came with this price and took mine plain cheese. I sat in the hollow room to wait while the manufacture of my pizza was in a back room totally out of sight. They said it would take ten minutes, and I don’t think it even took that long.

When I opened the box with the familiar Roma logo on top, the shock on my face was quite apparent. I never would have thought that by thin crust they meant that dreaded Chicago / Ohio tavern thin style that gets cut in those tiny criss-cross cut squares. I was disappointed. 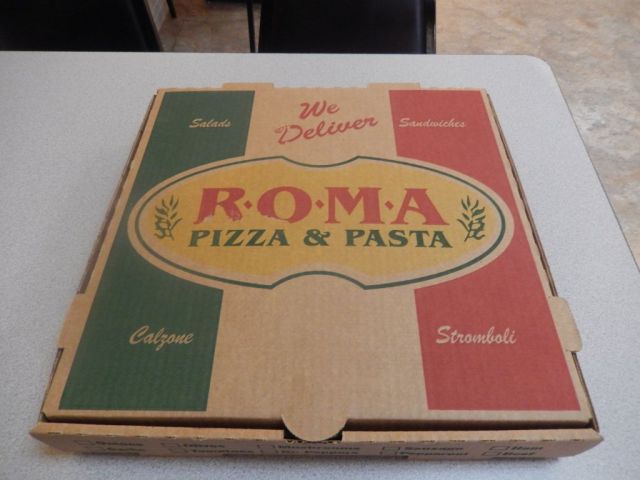 Concentrating on the edges to not get my hands messy, I was hungry and probably ate half of it there on-site. Sadly, there was little delight to be found, since I just don’t like this kind of pizza. Made it in the true tavern style, this formula just has unsatisfying ingredients. The cheese was provolone-like although it just could have been a low-grade Mozzarella. The crust was like a cracker. The bottom carried no char whatsoever and was only crisp from its texture, not from being cooked. To top things off, the tomato sauce was barely noticeable. All these cooked together result in an unflattering oily burnt look staring you in the face.

I’ll admit that there are worse things in the world to eat. After all, it is tomato sauce and cheese we are talking about. But, after a while, the extremely oily taste on this one just wore me down and I was done.

As I left, taking the rest home where it was destined for an extended emergency-only stay in the garage freezer, I pondered whether I need to pay a return visit to try Roma’s hand-tossed. Judging from the look I had at the one on the table next to me, I didn’t think it was something I needed to rush into. Maybe another slow Sunday when I find myself stuck in Franklin.