My friend Benny from New York City is one cool dude. Like me, he loves Elvis, Jesus, and pizza. To make it clear, that’s Costello, Christ and New York-style. When he learned that I was the Pizza Snob, he let out with a few of his favorite Manhattan joints with Gotham Pizza at the top of his list. News to me, I initially thought the boy might not be with it when I saw that Gotham looked to be a chain with several locations in the City. However, the Gotham slice I had one late fall night in NYC turned out to be my biggest and best pizza surprise of 2017.

Still dealing with some gnarly traffic, I couldn’t seem to find on my pocket computer GPS which Gotham I was closest to. Eventually, I spotted the broken sign and the giant lit “G” on the corner of 12th and 3rd. After getting an “A+” on my amazing parking spot, I made my way through the full-frontal glass door and windows into a room which looked shockingly too modernly pre-fab and corporately-manufactured to my pizza instincts. The place was spiffy, and there seemed to be a formula to its design. 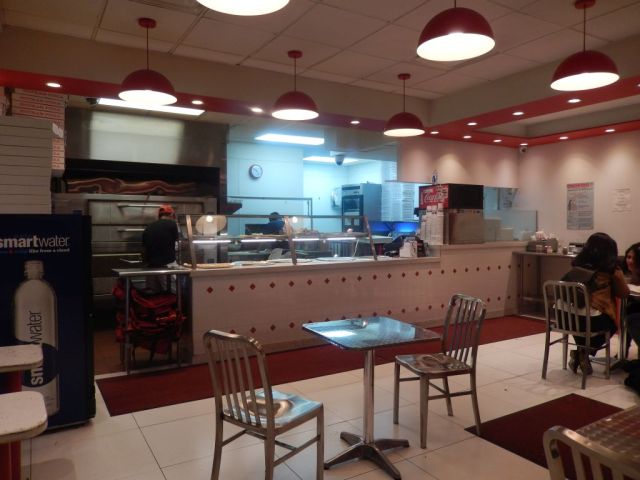 Despite this place looking so slick, the slices out on display looked awfully inviting. All the different species had a similar dark and toasted look to them, and there was something crumbly visibly-sprinkled on the end crust. The posted menu said that all slices used “Real Parmigiano-Reggiano cheese.” I was now quite interested.

Looking over said menu, Gotham is pretty much just pizza, regular or square, with only two salad choices and garlic knots on the menu. There are a few pizza options listed along with the available toppings.

I ordered up a plain cheese one ($2.75) and took a seat at a stool by the window underneath the cool modern lighting. The large open room had a lot less tables than you’d think they could fit. Optimistically, I envisioned the space was needed for a packed room at lunchtime with folks lined up to get a slice.

The quality of the Gotham slice hit me like a bat out of hell. Words like “fantastic” and “solid” were running through my brain, almost as fast as my mouth was devouring my slice. The cheese was tasty and applied in the perfect portion—it stayed out of the way with not an ounce to waste. The crust was wonderfully crisp and did carry some crumb-like application that made it even more inviting as I crunched my way through it. The dark tomato sauce was rich-tasting and completed the set of perfect ingredients that were perfectly cooked. The quantity of oil was well under control.

I came awfully close to getting a second slice and perhaps one of their squares, but in the interest of journalism, I decided to make another pizza stop downtown. But, here’s to Gotham, my fave pizza discovery of 2017. Thanks to Benny for the tip, and Happy New Year to all my fellow pizza snobs out there! This is a place to try in 2018.

PS I found nothing about any affiliation of the six or so Gothams around town which leaves me a bit puzzled. Perhaps I’ll try another one of the locations on my next visit through the City.