Spending a weekend home with my Dad in the Pizza State, as usual, I found myself trying to find a new pizza place to visit. While poking around in Cyberspace, it dawned on me that it had been over 40 years since I had been back to visit my old school, Seton Hall University in South Orange. Thinking that it would be cool to see if I still recognized the place, I also figured there might be some good local pizza nearby. My search led me to the Reservoir Restaurant right on the main drag of South Orange Avenue in the downtown area they still call the “Village.”

The history of the Reservoir is quite remarkable. It was started by an Italian gentleman in neighboring Newark in 1935, a time when there were few pizza joints in America. He later moved shop west to South Orange where the Reservoir has been since 1965. The business eventually passed along to his grandchildren who now operate this great place for pizza and other fine Italian food.

Located smack dab in the middle of the Village, there’s a row of metered parking in front of the Reservoir as well as a pay lot close by. It costs to park, but at least it’s cheap. The place is situated in a long free-standing building that takes up a big chunk of the city block. it even looks to have some residences on the second floor. 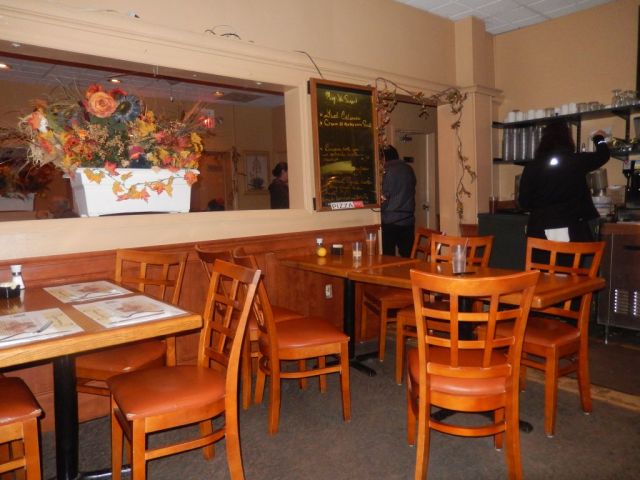 Walking inside and looking around; shoot, it might as well be 1965. The comfy and cozy room is timeless. There are few wonders of the modern world visible other than the ATM that assists in running the place as cash-only. With its maze-like multiple room setup and full Italian menu, this is a restaurant and not a pizza joint You can peek into the kitchen behind the counter where a sign posts another wonder of the modern world: a gluten-free pizza option.

Being in an old Jersey family-run restaurant like this just makes the Pizza Snob feel good all over. It’s refreshing when great things that don’t need to change don’t change. From the casual ambiance and friendly staff, down to the family recipes that have survived through generations, places like the Reservoir make life so joyful.

Dad and I got quickly down to business with a cheese pie ($11.50), a big salad to share and a meatball chaser for our daily protein. After polishing off a serving of hot fresh bread, the pizza arrived on a silver platform looking smaller and darker than expected. There were eight small slices covered with a rich red tomato sauce and a sufficient scattering of dark char spots. Some of the spots peeked out of the end crust that was smothered with tomato sauce and cheese. On top sat a few pizza bubbles. If looks alone could satisfy my craving for pizza, this one could take the prize. The cheese and sauce looked so enticing and resembled a living organism that had somehow devoured the crust upon which they sat.

The Snob’s stomach had a moment of concern about the pie’s oily look, but it was a false alarm. As for calling this a thin-crust pie, I wouldn’t since there was quite a bit of a somewhat sinewy space between the crisp bottom and the covering of sauce and cheese. Regardless, it was cooked perfectly with a light char on the bottom that let each slice stand good and firm. The crust was delightfully delicious and was laced with a crumb-like texture that made it even more enjoyable to munch. Everything about this pizza tasted just right.

There is just no denying that this is a solid pizza with a fabulous taste made with fine ingredients. It’s no wonder that this place has been around for 80 years. All I have left to say is “Long live the Reservoir Restaurant.”