The last few times I have been in London, I’ve made a Saturday morning visit to the sprawling and splendid Portobello Road Market. Looking to do something different this year, a local mate suggested I try instead the somewhat similar Camden Market in lively Camden Town. So, I did just that and thoroughly enjoyed my time there.  Rather than meandering through streets and neighborhoods like Portobello, the Camden Market is in an old stable and all the action is confined within its walls. Little did I suspect that amongst all the splendor of this junk-free market that has something for everyone, I would find some delicious pizza there courtesy of the Camden Pizza Co.

Overall, the food offerings at the Camden Market are quite amazing and pretty much cover any ethnicity you could think of. The few places that I nibbled out were all first-rate. As I ventured throughout the vast market, I believe that I spotted at least five separate stations for the CPC, the only vendor that I saw selling pizza. Unable to resist any longer, I selected the pot that was outdoor near the Camden Lock exit at the market’s far end. 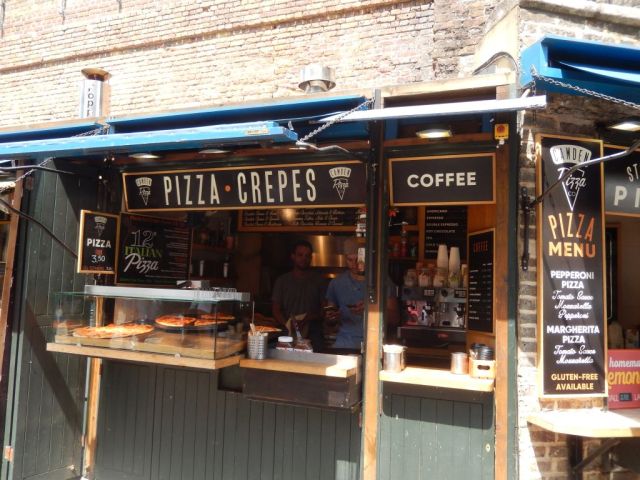 With a choice between Peperoni and Margherita, I close the latter plain slice for £3.50 which they advertised as Stone-Baked. Their cooking-mechanism however looked like a regular gas oven to me. Excitingly, the slices were all cut and styled in the form of a traditional New York slice. My slice was served to me immediately on a paper plate which was a big mistake. It was not reheated.

Although it was therefore served to me lukewarm, I can’t escape the fact that it was really quite good. The crust was really off the charts amazing. It was cooked firm, crisp (without any real noticeable char) and was seriously tasty. It was a crust that you enjoyably chewed, chewed and kept on chewing with your mouth enjoying every marvelous moment.

Both the Mozzarella cheese and tomato sauce were sparsely present, however the cheese on my slice wanted to slide off in a big sheet. So perhaps it simply wasn’t as melted and blended like it should have been. But, CPC sure scored big with me in keeping their pizza nice and light the way it should be—not big fat and sloppy like you would usually find at a market venue like this.

Checking things out, I see that CPC is open seven days a week just like this fantastically-fun market. (It opens at 11am and closes at 7pm weekdays and 10pm on Saturdays and Sundays.) It’s a place worth checking out at any time in this Snob’s opinion. It’s a good joint!

PS After finishing my CPC slice, I chatted with a young American girl sitting next to me, only to find that she was a pizza-loving student from my home state of New Jersey. She kindly recommended Pizza Paradise on Brick Lane (which you will next read about in this space) as being one of the best and most New York of any pizza she has found in London.

PPS I picked this young lady out as American by her accent. Of course, the only other way to spot an American in London is by the way they look before crossing the street!