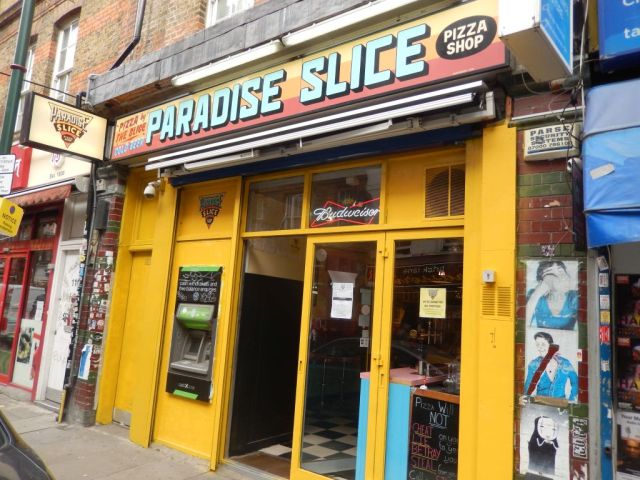 There are some who think that I punish myself by looking for a great New York slice of pizza outside of New York City. Yes, I agree that NYC is where the mostest of the bestest can be found. However, in this space I have documented some fab slices elsewhere in the USA. Most come courtesy of smart folks who have wisely transported their NY-acquired skills to a location in need.

Well, it looks like this proven business strategy can also travel across an ocean. And, thanks to a referral from the pizza-loving American Girl that I met on a late morning in Camden Market, I wasted no time and made an afternoon journey to the Paradise Slice Pizza Shop over on Brick Lane. Paradise is just a 12-minute walk from Liverpool Street Station, however I rode an Uber from Central London instead of the train since said station was closed for Saturday repairs.

Paradise wasn’t started by an ex-New Yawker, but by a Londoner who spent a dozen years living there. On her return, she and her restauranteur partner attempted to recreate what she had loved and studied in NYC. Well, let’s just say that they have brilliantly succeeded, bringing the closest thing to a New York City pizza joint that these eyes have ever seen in London.

My journey to Paradise also had a great side benefit in that I had never been to the hip Brick Lane area. This historic narrow street in East London has been vibrantly revitalized and now hosts a lively arts, fashion and food district. 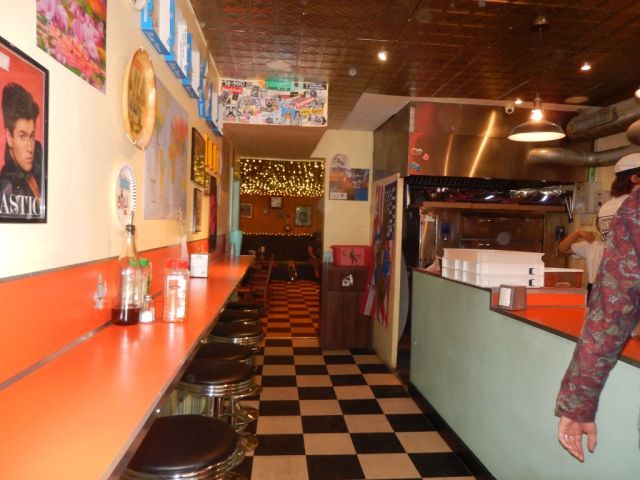 If someone had blindfolded me and put me inside Paradise, except for the sign advertising the “slice and a pint special,” I would have thought I was in Manhattan’s Greenwich Village or Lower East Side. The place had an authentic pizza joint look although it’s bright colored décor and tiled floor added a clever touch of art deco.

The in-your-face greeting that I received from the guys behind the counter really made me feel at home. I wondered if they were sent to the States for training? And as I paid for my slice (£2.80), a box on the counter gave me the option of placing my tip in a box for either my President or their Prime Minister, whomever I hated most. I keep my politics out of my pizza, but let’s just say that my choice led to a fun chat with my pizzamaker.

After my plain cheese slice was reheated, I took it over to a seat at the counter on the wall across from the oven and order counter. Paradise also has a styled-out back room that makes for a great place to hang with a crowd while devouring one of their monster 20-inch whole pies.

It was such an unexpected thrill to be this far from home and be looking at a pizza slice that just looks so correct. It was long, lean and thin with a rich dark red color and the tell-tale signs that it was well toasted. That dark tomato sauce was the first thing that my taste buds tuned into, and I would soon declare that this was the richest-flavored sauce I’ve yet to encounter on a slice of pizza. Not annoying nor distasteful, it was differently delicious.

The bottom crust was completely covered with a dark char that made for a great crisp-tasting crust. Could this prolonged toasting perhaps account for the deep flavor of the sauce? The crisp cooking however did kill the end crust to a dry and brittle oblivion, but that was OK. The Mozzarella cheese was standard fare, and it was smoothly blended with the sauce. I joyfully closed things out with a classic Fold and Rip move that made me feel like I was in the Big Apple. Paradise makes a super slice–one that I would never pass up.

This adventure now makes for two great NY slices that I have had in London, Mulberry Street being the other. While both are equally fantastic, to a Yankee like me, Paradise provides more of a New York feel if you are homesick, while Mulberry has more of an English flair if that’s what you are in the mood for. However, neither trait should keep you from trying either.