One of my favorite places on the planet is the Factory in Franklin. Just a short hike from the brick house I call home, this converted building complex is a popular place full of great local places to eat and shop. In fact, I’m writing this there in a coffee shop before I go visit the record store. Now, if there was only a great pizza place where I could complete the trifecta of my three favorite things in life: coffee, music and pizza. Sadly, the Factory only has MAFIAoZA’S Franklin, and I simply don’t care for their pizza.

MAFIAoZA’S is technically not in the Factory but in a free-standing structure on the Franklin Road side of the original buildings. In the 20 years I’ve called Frank-town home, there have been several failed restaurants in this site. After so many flops, it was probably time to tear the building down and build a Starbucks, but MAFIAoZA’S has now been up and running for a few years and looks like they will make it. 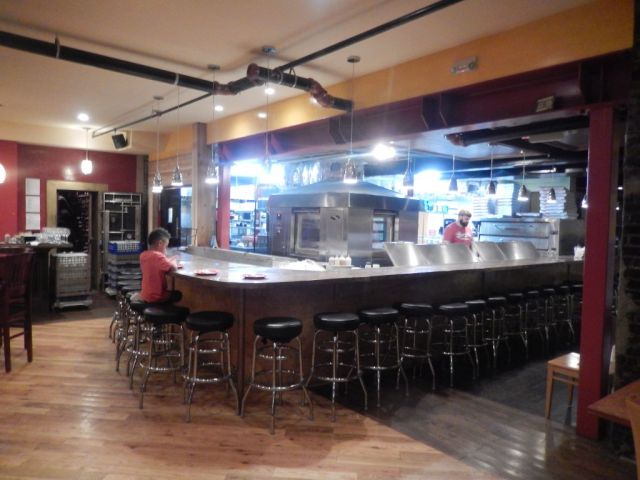 The Snob has already made enough trips to their original 12 South Nashville location to know he doesn’t dig their pie. (BTW – they also have a third location down south in Birmingham, AL.)  But, being so close to home, the Franklin location was just staring me in the face, and I could not avoid someday paying it a visit. The right opportunity came when I wanted to get together with my pal Jonny P. who practically lives next store to the place. He also lured me in by telling me how I just had to try their Fried Cheese Ravioli Sticks appetizer.

Well, JP and I met one evening for an early dinner and like I said, I would up still not liking their pizza. However, we did manage to make the best of things by sharing and really enjoying some salad, an order of meatballs and said ravioli sticks. As for those sticks, man, they have absolutely killed it with this thing. The three long toasted treats were simply remarkable, and we also got to close with some killer cannoli.

As for the pizza, I changed my MO a bit and we ordered a small six-slice peperoni pie. (This ain’t a slice place.) True to their legend, the pie was very, very greasy, a situation that we probably exacerbated by adding the “ronis.” The crust, which had no char whatsoever and wasn’t crisp at all, was otherwise tasty and chewy and probably this pie’s best feature.

JP was right on when he said, “it’s mediocre pizza that just manages to tickle your pizza funny bone, but not much more.” And for those of you keeping score, I’ve given the place a slight upgrade from my previous review of their Nashville spot, although I’m not sure what they did to influence me.

Fasting forward a few weeks, I really wanted Mrs. Pie to try the ravioli sticks so one night we decided to do some take away. Ordering a salad and the sticks, I got home to see that my package include the sticks and a slice of pizza (somebody else’s leftover) instead of the sticks, forcing me to return to get my proper due. We both dug the sticks but agreed that they were probably not the healthiest snack for us to be sharing. Still hungry, I gobbled down the erroneously-delivered slice and guess what? I still don’t like their pizza.