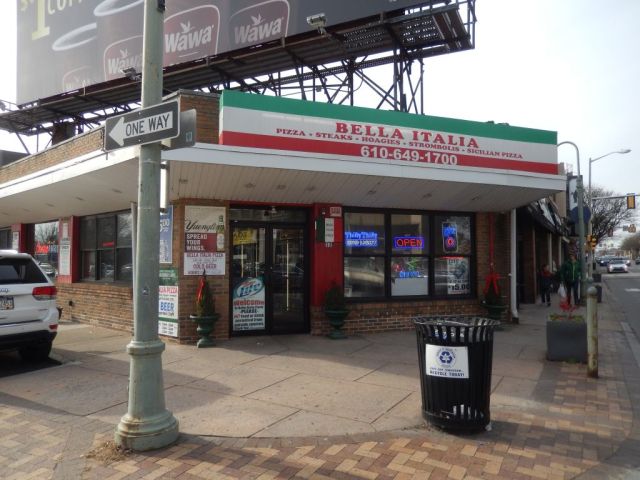 Although I never quit trying, for some reason, when Mrs. Pie and I travel together, finding new pizza places is never our #1 priority. Therefore, I usually find myself in a mode where I just go with the flow but keep both my eyes and Pizza Compass

app open for opportunities. Recently visiting the “kids” in their new digs outside Philly, one Saturday afternoon found us in the western Philadelphia suburb of Ardmore, PA. A quick aside, it was seeing the train tracks there when I learned all about what locals call the “Main Line” that travels through the Philly ‘burbs. (It’s actually the Pennsylvania Railroad just like in the game of Monopoly.)

I first spotted Bella Italia Pizza as we drove west on the uber-long main drag of Lancaster Avenue. This place had one of those locations that makes a commercial relator wet their pants: a corner storefront sitting on an angle facing the main street. Bella used this positioning to its full advantage with an Italian flag-colored sign that easily caught my attention. All I needed was a reason for the car to stop and thankfully shopping in this area was suggested. I let the team do just that while I instead moseyed over to Bella for a midday slice. (Speaking of their location, they are right across from the cool-looking Ardmore Music Hall where I hope to someday catch some live tunes.)

Making my way through Bella’s front door, the order spot on the counter hit me right in the face, and I requested a single slice which was three bucks. Things otherwise looked fairly normal, and there was a decent-looking selection of slices sitting out for show. 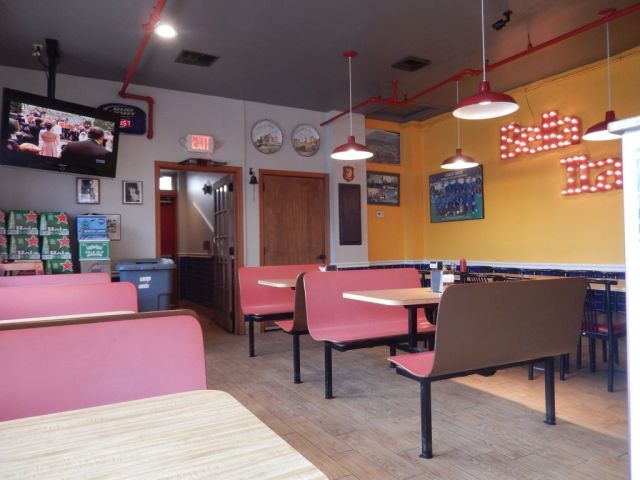 The long and narrow shotgun counter area in the front led to a more spacious area in the back where I sat at a booth and watched some of The Godfather on the large hanging TV. On my way there, I couldn’t help but notice how unusual it was that this pizza place also sold beer by the six-pack—both domestic and import!

I waited about three or four minutes for my slice to be ready, and on first view it looked quite promising. It was a good size although in a somewhat wider triangular shape than I’m custom too. Maybe too, there was perhaps more oil glazing off the cheese than I’d like to see. This turned out to be a telltale sign since I soon discovered that the taste of the cheese on this slice would be an enjoyment obstacle.

Talking crust, there was a decent black char on the bottom surface, and although it did turn out to be a little dry, said crust did pass the Snob’s crispness test. Bella also served my slice very, very hot which led to a delicate eating process. Like most other pizza-eaters, I’m usually too impatient to wait for things to cool down which typically leads to a guarded eating endeavor that usually doesn’t allow all the full flavors of the slice to be truly appreciated.

I ate the entire slice and somewhat enjoyed it despite the aforementioned flaws. The main drawback to the Bella slice was the cheese’s failure to win me over in the taste department. It was a good attempt at a NY Slice, but maybe just not with all the right stuff.

One more thing. I was surprised to see that they closed at 10pm. I would have thought that the concert crowd across the street might enjoy an after-show slice.