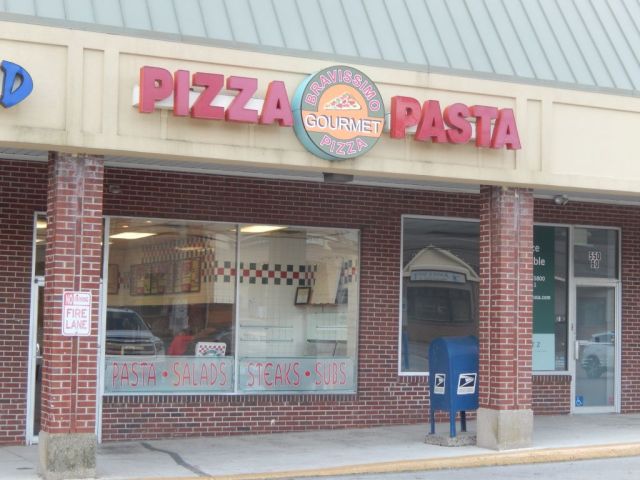 Even when on holiday, weekend afternoons are still meant for naps. That is unless you want to visit a cool local record shop and discover new pizza. So that’s exactly what the Pizza Snob did while the family snoozed one recent Saturday afternoon. I instead adventured along the Main Line in the western Philadelphia suburbs.

After first flipping through some vinyl at Shady Dog Records, my first of two mid-day pizza stops would be Bravissimo Pizza & Pasta. There were quite a few pizza places in my vicinity, and while nothing at Yelp looked to be a home run, this joint was one of the higher rated ones.

Located in the middle of a strip center on the main road of Lancaster, I found that I had both the parking lot and the pizza joint all to myself at this in-between hour. Bravissimo was about as normal and unassuming as a pizza joint could be, except for the odd choice of the adjective “gourmet” on their sign. So, as I could probably do in my sleep, I went in, ordered a cheese slice ($2.65) at the counter and took a seat in the booth in the back.

Thoughtfully delivered right to my seat, my slice was wide and white which are two labels I don’t really like to give to my pizza. Not being very hungry, I had a hard time stirring up any enthusiasm to eat what looked to be a little chubby and lame specimen of my favorite edible. There was too much mootz on the top which was a big minus, but the dark crispy crust on the bottom which on the other hand was a potential plus.

Overcoming my lethargy, I got up the courage to give it a go. I made my way through the pile of cheese with the unexpected delight of some truly refreshing flavor. Heavy oregano and tasty tomato sauce were clearly the saviors to this slice. At least the overabundant cheese didn’t “oil out” to any undesirable excess, and the crust was modestly crisp.

I ate it all and would say that surprisingly, I reasonably enjoyed it. Concluding with my to-be-patented someday “Fold & Rip,” this maneuver did result in a giant cheeseball landing on my otherwise clean white paper plate. (BTW – I did eat it. The cheeseball that is, not the plate.) 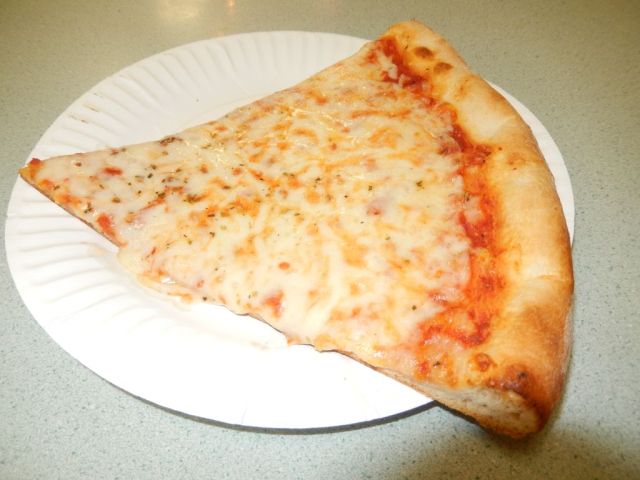 So, Bravissimo serves from a slightly different school of pizza-making than the Snob subscribes too. Their pizza was just OK in my book which just leaves me no reason to return. I’ll will go seek new discoveries over revisiting mediocrity any day.