Joey Brooklyn’s in St. Pete Florida—Pizza and the Yankees!

As I write this, the New York Yankees have the best record in baseball. Earlier this year, I just knew that I had to see this great Bronx Bomber team in person as often as I could. My clever plan to invite Mrs. Pie to the west coast of Florida to enjoy the beach was a home run, and she graciously agreed to join me at Tropicana Field in St. Petersburg to see the Yanks play the Rays before we started our week together in the sand. Little did I know that I would find this area full of both fellow Yankee fans and New York style pizza places.

Flying into Tampa on a Saturday morning, we would do the game before heading to the coast that evening. This gave us time to explore beautiful downtown St. Pete. The streets were loaded with shopping, food and drink, and while letting Mrs. Pie do her thing in the shops, attracted to by its name, I ventured over to Joey Brooklyn’s Famous Pizza Kitchen for my first slice of our vacation getaway.

Smack in the center of the late-night bar scene, turns out that the block on which Joey’s sits is called “Jannus Landing” which was the first section of downtown St. Pete to be commercially developed. It was a given that Joey’s thrives on selling after-hours slices, but fortunately for me. their clock runs from 11am to 3am. I moseyed over and first started chatting with the table of Yankee fans working on some pizza at one of the two lone tables out front.

After proclaiming today’s inevitable victory, I went inside the tiny room to order a cheese slice ($2.95) The inside wall was decked out with a colorful mural of a “tagged” New York subway car. 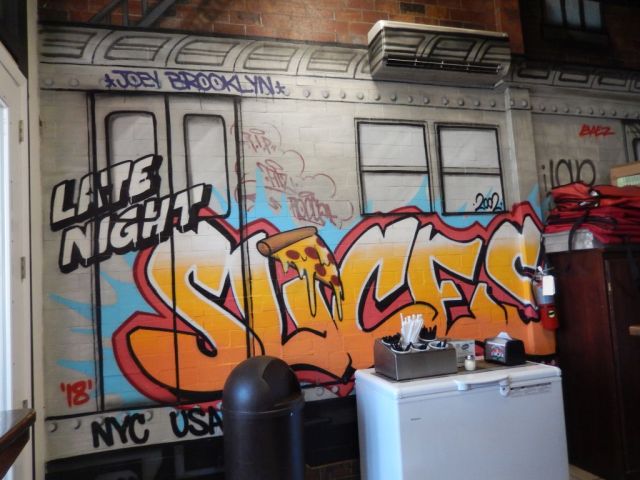 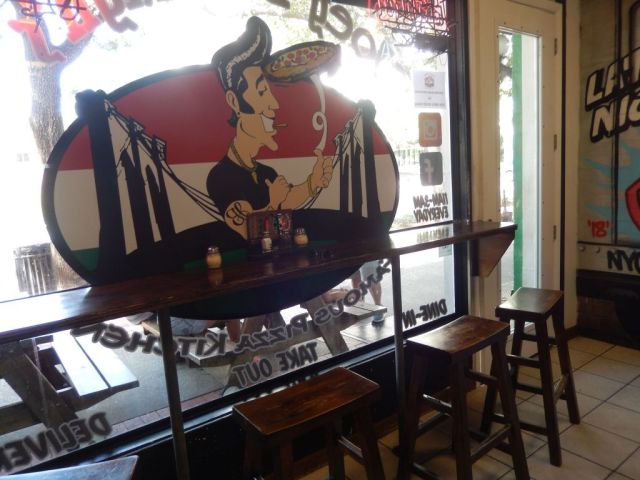 When asked, I chose to have my slice on a plate instead of in a box. I would consume it inside at the front window counter where it was much cooler weather wise than it was outside. Although there were no visible slices, one magically appeared and was reheated and delivered before you could say “Play ball.”

Despite using the name Brooklyn, Joey’s slice had nothing to do with this borough and Manhattan would have been a better choice to describe its style. Pre-rating this one with my eyes, the small, almost right triangle of a slice was styled right, but looked a little pale, especially in its crust. Bite one also found it to be a little hotter than I like. Although not painful, I impatiently didn’t wait for it to cool down, and as a result, the cheese did slide a little as I ate.

But my most important assessment was that this pizza was just mediocre in the taste department. It was a familiar-tasting slice that I’ve had way too many times before in the NYC motherland where there are many average-tasting slices made for the masses. The ingredients were nothing special, and I detected no effort to dazzle it with any seasoning. When you are a pizza snob like me, average just doesn’t get me excited

Hungry at 2am in the morning, JB’s slice probably tastes a lot better than it really is. But, during the day, it just didn’t satisfy enough to make me want to return.