Ms. Pie and I recently vacationed in a beautiful place that before we got there, I didn’t even know existed. Together we settled in on the lovely beach of Siesta Key on the west coast of Florida. It’s in the vicinity of Sarasota, a place that I had heard of. As for pizza, knowing that 90% of all people from New Jersey retire in the Sunshine State, I figured the odds of finding some good New York slices were in my favor.

On our first night out, the calling was for seafood, however, during our pre-dinner tourist excursion, I spotted a pizza joint worthy of investigation. With their Italian flag colored truck first catching my eye, I came upon Solorzanos Pizzeria there on a busy side street off the main road. It’s a lovely elaborate shrine to their birthplace, the great city of Hoboken in the Pizza State. These folks cooked their first pies in Jersey in 1977, and come 2003, they left Jersey and headed south. 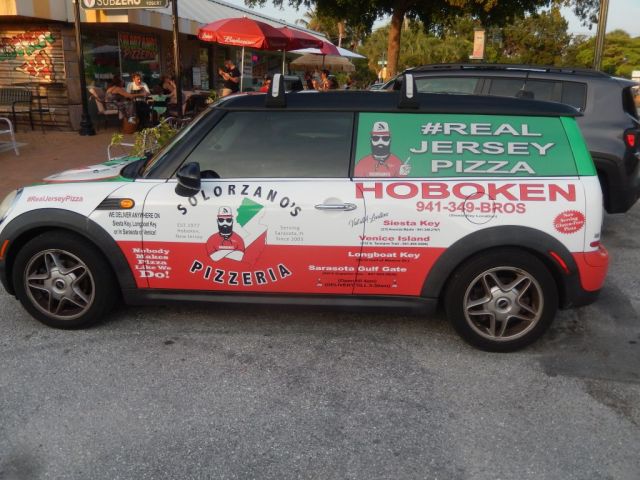 Well, despite the fancy design and their boast of “Real Jersey Pizza,” my experience at Solorzanos made me think of the Texas expression “All hat and no cattle.” Their pizza was just average. While the folks visiting from Iowa will think they died and went to Heaven; the Jersey snowbirds likely won’t be completely satisfied.

At least Solorzanos sold slices, and I ordered mine from the very Jersey woman behind the inside counter and took a seat at a tall round table. There was plenty of seating both inside and out, and the pizza business was rather robust for an early Sunday evening. Even though it was dinner time, there were several “just-a-slice” snackers like me at work.

The general look of the slices I spotted was normal, but I received my first surprise when I saw that a slice, which was of regular size, sold for a beach-inflated four bucks. It didn’t take long for mine to get warm in the pizza oven. When I got it, I was initially taken back by how shiny and greasy it looked. It was however designed well and was not overweight in any of its key components.

I guess I could have gotten beyond all the grease if this slice had any decent flavor to it. Sadly, I think they left the flavor in Jersey when they moved to Florida. Both the crust and cheese just didn’t dazzle the taste buds of this snob. I do give Solorzanos style points for the proper design and for keeping it compact, but they flunked in flavor. The slice was also of medium crispness and rightfully deserved some more time in the oven.

It’s great that Solorzanos gives my home state cred when they boast being from New Jersey instead of New York, but they could do better with their pizza. It’s good, but far from great.