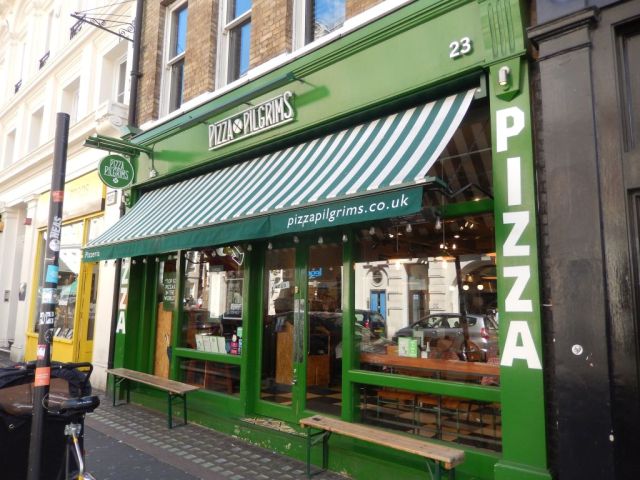 When I first visited London in 1989, it was a well-accepted fact that the food there was for the most part downright awful. This was especially true the quicker and more casual you were looking to dine. But things have sure changed for the better.

During my recent visits, I have even noticed a surge in quality pizza through some successful New York-style copycats as well as several Neapolitan traditionalists. While local establishments are more prominent than chains, it does seem however that you can’t turn your head without seeing a PizzaExpress. First opened in 1965, this old London mainstay is now owned by a Chinese private equity firm and boasts some 470 locations across the Atlantic Ocean.

Some five years ago, I wasn’t all that jazzed about the pie at PizzaExpress. However, I do see that they have since added an extra thin offering to their menu that I need to try someday. But, as far as up-and-coming UK pizza chains go, these guys need to watch out for Pizza Pilgrims!

I had made no advance pizza plans for my latest visit to London. On a whim, I asked a young gentleman who I had met at a business meeting where he goes for pizza. His enthusiastic response about Pizza Pilgrims made it a must. Without hesitation, I was there the next afternoon for lunch.

Covent Garden is one of my fave London locales to walk, eat and shop, and I made my way there to PP. The sign on their window touting a bold statement from The Telegraph newspaper, “Top Ten Pizzas in the World,” caught my attention indeed. Looking delightfully local and friendly on the outside, I made my way inside where I got a sense from their layout and process that they were at least thinking of adding more spots. Embarrassingly, I was completely ignorant of the fact that PP was already a burgeoning little pizza chain 12 stores strong.

There were 10 pie varieties from which to choose, and when the waitperson came to my little table, without hesitation, I went with the basic Margherita at the top of their list. It was one-size-fits-all at the rather reasonable price of £7.50 (before PP’s 10% service charge). After telling my server that my order was the result of my being a pizza traditionalist, he lightheartedly replied “Aha, we call it the Queen of Pizza!”

Served up in a flash, the two words that came to mind when I first saw my pizza were small and gorgeous! Slightly oblong in its shape, staring down at the big puffy charred crust made my mouth water. All the other pieces of this pretty pie seem to fit together just right, and the slight glaze of oil made it shine beautifully.

Getting down to business, the crust tasted sublimely soft and delicious. The Mozzarella cheese was oddly deployed in small tube-like strips and my only mark against the PP pie was that although it was tasty, the cheese could have received a more-thorough melt. Rightly, it was lightly-sauced. It was maybe a tad oiler than I prefer, but it far from being too wet of an eating adventure. 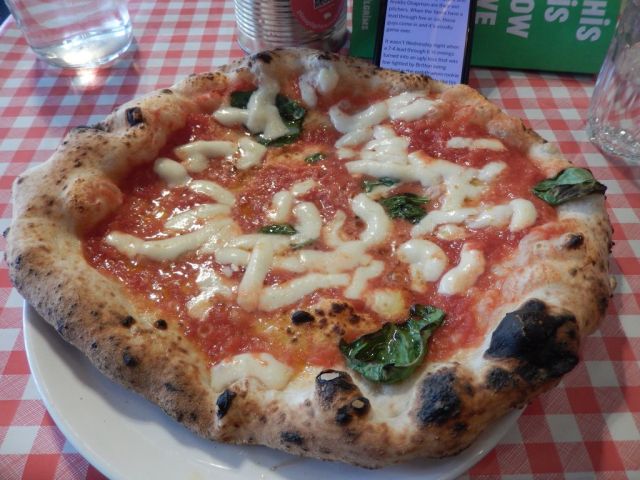 Sticking with the Italian way, the PP pie wasn’t cut into slices. I managed to avoid using a knife and felt much truer to form when I was able to rip and eat my way through. All things considered, I really loved Pizza Pilgrim’s pie and I give it my whole-hearted recommendation for being reasonably-priced, quick and deliciously-satisfying.

After doing some homework, I was quite impressed with the Pizza Pilgrim founders and how they got started and where they see themselves going. These clever guys first did their homework learning the trade on a “pilgrimage” through Italy, and going forward, their plans include the creation of a “pizza academy” for training future pizza-makers as they expand.

As Anthony’s Coal-Fired Pizza has shown us on this side of the Atlantic, a pizza chain doesn’t have to suck. Pizza Pilgrims is proving the same in England!