Sandy’s Too Pizza — A Splendid Slice in London

The Pizza Snob calls it “accidental pizza.” It occurs when I’m walking down the street and happen upon an unfamiliar pizza joint and boldly give it a try. I always feel like the odds are likely against a win since immodestly, the snob in me should already know a place that is any good. But, surprises like this one that I had in London, do sometimes manifest.

Walking about in the commerce district of the Fulham area in Western London, my passage on the sidewalk was blocked an A-frame sign hawking “Pizza by Slice.” This rather untypical message for England caught me off guard and elicited some intrigue. What did I have to lose other than a couple of quid?

The bearer of the sign was Sandy’s Too Pizza, a small storefront that resembled more of a café/wine bar style place than a pizza joint. Their small room had some limited table seating in front and in the rear behind the counter was an eye-catching rather large conventional pizza oven. 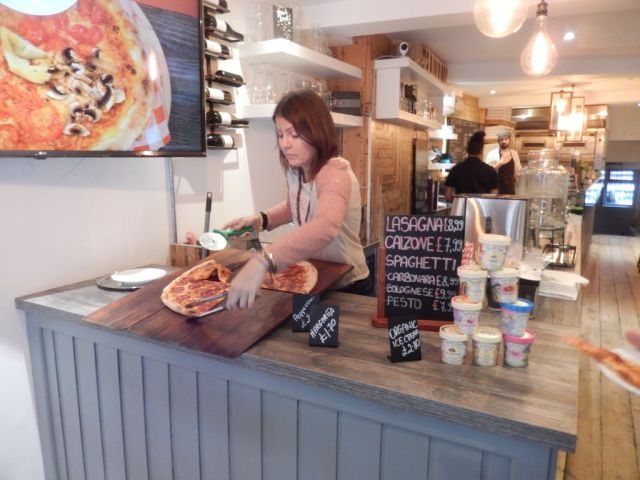 My attention however was mostly focused on the full-size sliced pie (half plain/half pep) that sat on a square wooden board at the street end of the counter. Although they billed their plain cheese slice as a Margherita, it looked about as akin to something you’d find in any ordinary New York City pizza palace.

Without delay, I ordered one of the so-called Margheritas (£1.70) while my mate from Ireland paid an extra £0.80 for the Pepperoni. The young lady behind the counter said that the slices had just left the oven but offered us an optional reheat which we of course accepted. It is rare for a pie to be too crisp for the Snob.

Well, we made the correct choice and our slices were received at the perfect eating temperature. My first bite quickly revealed that this was a remarkably great slice of pizza. I soon realized that it was quite appropriate to call their slice a Margherita since the soft and fluffy crust was made very much in a sublime Neapolitan style. Both the cheese and tomato sauce on top tasted true-to-form and were fantastically-deployed in an authentic NY-style creating this rather special hybrid slice. Whatever was missing from the crust being crisp was more than made up for by its spectacular chewy taste.

Later, back in the USA, I was not-so-surprised to learn that the “Too” comes from the fact that there is an original Sandy’s Pizza in the Marble Arch area of Central London. The surprising thing I learned is that Sandy’s considers its cuisine to be French/Italian fusion and uses Swiss Gruyère cheese instead of Mootz! The Snob didn’t even notice!

At the end of the day, all that matters is that his is one of the best pizzas that you will find in London. Stop in for a quick slice and you will be glad that you did! For the record, my friend from Ireland wasn’t shy in proclaiming that he just had the best slice of pizza he’s ever had. Wait until I take show him Manhattan!