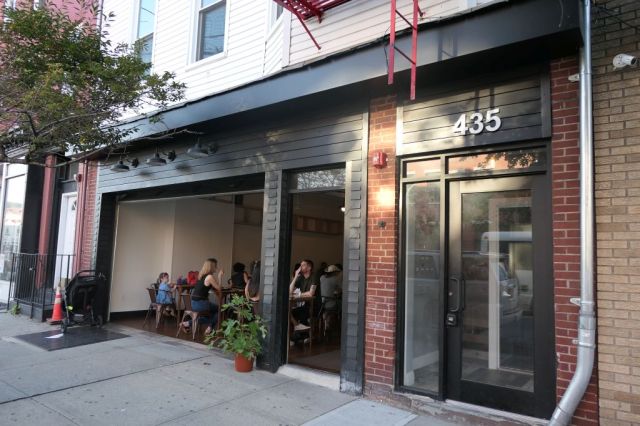 Oh, does the Pizza Snob just love it when the pizza world starts to go crazy about a new place, and he gets the chance to go there. Such was the case when the New York Times came out with a rave review of Jersey City, NJ’s Bread and Salt. It was some serious positive press! For background, B&S was started in Pittsburgh in 2015 and just recently moved its operation east to JC.

So, without further or due, on my next trip back to the Pizza State, I grabbed my kid brother early one Sunday evening. We headed out to the Northeastern tip of the Jersey City Heights along the Hudson River just before the Hoboken border to give B&S a try. Riding along a parked car-infested Palisades Avenue, we never saw B&S although the GPS showed we passed #435. Luckily, we find a spot alongside a park (Riverview-Fisk Park) with a great view of Manhattan. After first stopping to view the skyline, we backtracked to find the place.

Following the door numbers, we made our way to #435 to find no sign other than the B&S name painted on the glass door window. The garage-style store front was also in the open position on this pretty day. The other things we unsurprisingly noticed were that the seats were all filled, and there was a clog of customers at the counter.

We made our way back to the rear where the counter surrounded the ovens. Finding the menu, we saw what we would like to order, but what we hadn’t seen yet was any pizza!  They eventually pulled two fresh ones out of the oven, and in a matter of minutes, they disappeared onto the trays of the front wave of the somewhat disorganized waiting crowd. As the next line of folks who had already ordered moved closed to the counter, we saw how the drill worked. 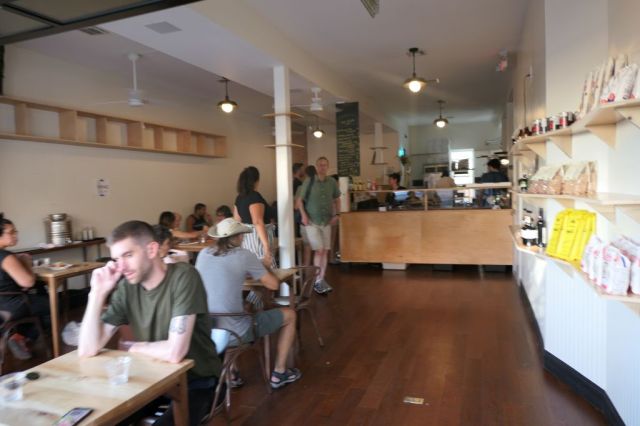 While we were there, I noticed that we had caught a lucky break with the length of our wait since the entire time we were there, the line maintained a constant stretch to the front door. This was on a Sunday night at 7pm!

As for the pies, they were of a long oblong shape, reminiscent of a famous place in Texas called Campisi’s. One was Marinara style, just tomato sauce and dough that they called a Rosso, and the other was Margherita style which had Mozzarella cheese and basil added on top. We were of course tempted to try a slice of each variety.

We ordered our slices and couldn’t resist a few other items (watermelon salad and meatballs) off the “Not Pizza” chalkboard menu. These goodies came first, and we delightfully devoured them at a nearby table where we could keep an eye open for our slices. The meatballs came with a few pieces of bread that were an enticing foreshadowing to the pizza crust we would soon savor.

When our four slices arrived atop a plank of wood covered in butcher paper, I was pleased to see that one of the Margheritas was a corner slice with two end crusts. With everything I read about this place using the word “bakery,” it was no surprise that the crust would be special. It surly was. It was a crust-centric slice and was certainly one of the best tasting pizza bottoms that I have ever had.

The deliciousness was enhanced by the juiciness of the splendid tomato sauce and olive oil blended atop the crust. Looking at my photos of these slices makes my mouth water. The cheese was quite sparse, but nicely melted and satisfying. 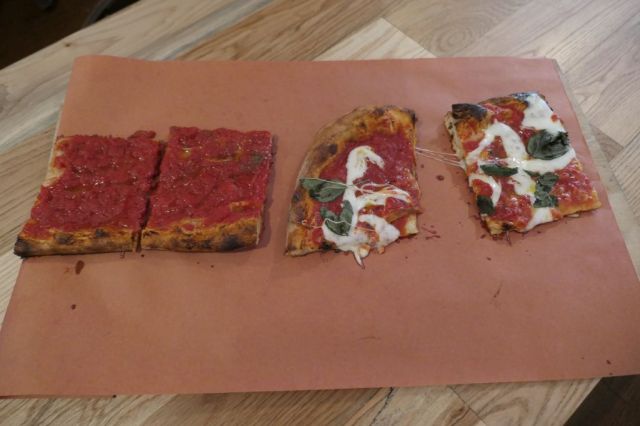 B&S has more the feel of a small-town New England bakery rather than a New York area pizza joint. But, to say it’s just a bakery that throws cheese and sauce on top of good bread would be a serious understatement. It’s made in a true pizza style with solid ingredients and is reminiscent of some of the finer squares around.

If you ever are in Manhattan, make a trip across the river, take some Manhattan Skyline photos at the park, and then enjoy a truly wonderful pizza experience at Bread & Salt. On top of the great food, it’s a cool place with a hip vibe. You will be glad you took my invitation. I can’t wait to come back with some family and friends.