During last month’s COVID getaway to the Florida Panhandle, while driving back to 30A from a day trip to Panama City Beach, I spotted a pizza joint with a name that made it a place I just had to visit. I guess that this being the South, there had to be at least one Bubba’s Pizza somewhere. This name of course doesn’t follow any of the suggestions I made when I wrote my authoritatively legendary “Naming Your Pizza Joint” piece. I don’t think there are many master pizzamakers named Bubba’s in Naples, Italy or even New York City for that matter.

For the record, Bubba has two PCB locations labeled “West” and “East” and it was the former that yours truly spotted on the north side of Highway 98. Since Mrs. Pie and I would be meeting some friends elsewhere for dinner on this, our last night at the beach, I thought I should squeeze in a late afternoon snack courtesy of Bubba. Seeing that they didn’t do slices, the plan was to bring a ten-inch pie back to the condo. So, I stalked my watch and was undoubtedly their first customer call of the day when I connected just after the hour struck three. 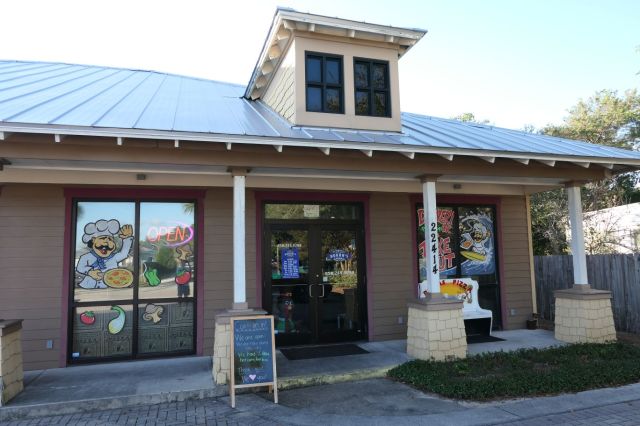 Order in, I made my way over to Bubba’s little space adjacent to a seafood shop in a free-standing building. Inside it looked like a nice place to gobble down some pie, but instead I just picked up my small pizza box and headed home. Funny thing was that I was in a total mystery about what Bubba’s pie would be like. I was somewhat eager though since their bad Yelp reviews only made their pizza sound better to me. (e.g. “too thin” or “too crisp.”)

Back at the pad, I paused with tepid anticipation before I opened the box, wondering if this was just gonna be a fat, doughy and cheesy mess. Well, imagine my surprise when it tuned out to be a Jersey tomato pie! There was that unmistakable swirl of tomato sauce atop a thin lightly cheesed crust! Later looking at their website, I discovered that these guys were from Philly and grew up visiting the New Jersey boardwalks. No wonder!

The main things that weren’t to my liking about this pie was that I wasn’t eating it fresh out of the oven and that it was only a ten-incher. But man, it was downright respectable and super satisfying. Again, like Lola’s from my last beach trip, this is something special that folks down here just may not fully appreciate. 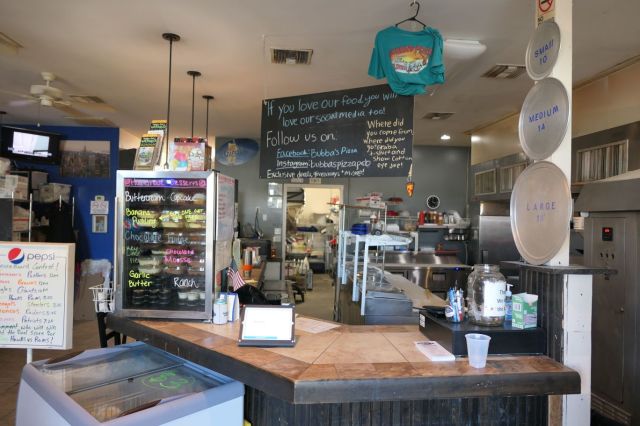 My pie was cut into six small slices that were firm and folded nicely although they were not charred to any significant crispness. But that was OK. Thee cheese and tomato sauce were both top-notch and delish! Despite being this close to dinner, I couldn’t resist finishing the whole thing off. It was fantastic. Who woulda thought you’d find a tomato pie in Southern Florida!

Eating this one at home though didn’t offer me the chance to thank my pie’s creator. But I wasn’t gonna let that stop me. With Bubba’s number still listed in my recent calls, I couldn’t resist calling them back to thank them. When I told him that I was the guy who just picked up the pizza, I could sense the panic in his voice about why in the world I was calling. Likewise, I felt his relief when all he heard from me was how great I thought their pizza was.

So, don’t let the name scare you away and give Bubba’s a try if you are ever in the PCB area. I know for certain that next year I’ll be there sitting inside eating a hot fresh one.