Mrs. Pie and I have lived in Franktown for over 20 years and have always loved our quaint historic downtown. Drive west on Highway 96 and you will eventually hit the circle and immediately feel its charm. Albeit small in quantity, the quality of the shops and spots to eat has been high. However, things started to change a bit once they let some national chains take over space from locally owned businesses.

While downtown Franklin still gets a high mark in my travel guide, there has been a scattering of things I’d rather not see there. Why not leave Starbucks and Chicos for somewhere other than our beloved downtown? However, these infractions seem minor when compared to the giant monstrosity of a hotel complex that has recently opened. It was a sad day indeed to see the building where I got my haircut for 20 years get torn down for this place. Yours truly believes that tourists are best to simply visit downtown Franklin rather than stay there at the Hilton!

In addition to a coffee shop that we didn’t need (please frequent The Coffee House on the corner instead) and an expensive steakhouse, this compound also includes Culaccino, a new Italian restaurant. Call me a hypocrite, but I decided to give in and try their pizza. The other thing I would give in on is blogging about a place where pizza is not the primary focus. Still struggling to find new pizza with the slowdown from the Pandemic, I thought what the heck.

With a ridiculously long waiting list for a reservation, Mrs. Pie and I made our way there with some friends at an odd late Friday afternoon hour. Culaccino’s moderately sized space inside was somewhat crowded but since the weather was delightful, we opted for an outside table.

According to their menu, these folks seemed serious about their pizza boasting the description “72-Hour Fermentation” directly under the pizza caption. It wasn’t surprising that at a place this fancy we wouldn’t be looking at a thin greasy slice, but instead a crust-centric Neapolitan. There was also no surprise either when I ordered a salad starter to be followed by their most normal cheese pie which in this case was the L’Unico (which means “The Only One” for $13). Said pie featured san marzano tomato and bufala mozzarella which sure made things sound hopeful. With many other interesting menu offerings available, I was the only one in our party doing pizza.

My pie arrived post-salad looking somewhat small and cut into four tiny slices. But perhaps it was the right size on which to solo. It had some heavy char spots atop its slightly uncircular shape and its crust ends were puffed up. The basil leaves on top of the light sauce and circles of cheese were mostly for show and had taken a heavy beating in the hot oven. All in all, I must say it looked extremely appetizing.

Well, let’s just say that Culaccino’s three-days-in-the-making dough tasted fantastic! They also did a great job in keeping the pie’s design flat which avoided a soggy mess in the middle. The cheese was downright delicious however the tomato sauce could have used a boost from some additives (perhaps more oregano and garlic) to give it a zestier flavor. Still this was darn good, and as fast as you could say “Hilton Hotel,” I’d eat it again. 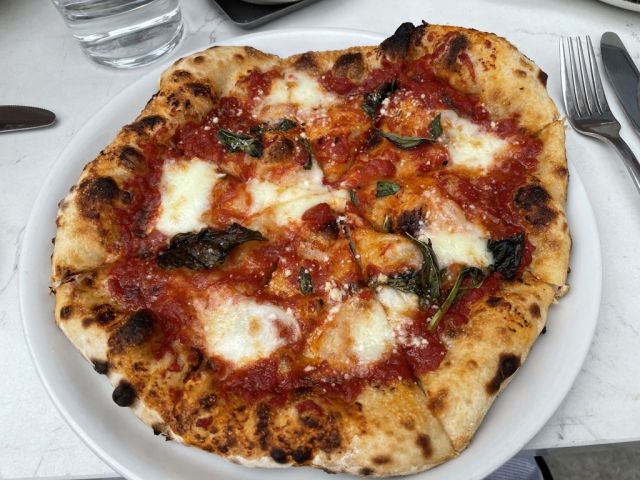 At the time of my visit, I’m fairly certain that Culaccino is the only place in Franklin for you to get a Neapolitan-style pizza. There are however two new places in the works that I will be reporting on soon. And while I enjoyed my pizza, I’m probably asking the impossible, but I would have much rather seen somebody like Five Points or Joey’s open a New York-style slice shop downtown instead.