New Orleans’ New York Pizza—Not Living Up To Its Name

As he approached his second pizza stop in The Big Easy, the Pizza Snob wondered if these NOLA places read my “Naming Your Pizza Joint” blog. Like Metairie’s Brooklyn Pizza, Uptown’s New York Pizza also employs the biz-wiz of name-checking a location famous for good pizza. Unfortunately, in my opinion, the latter takes that liberty too far.

After getting settled in my French Quarter hotel room then enjoying a nice stroll on a beautiful Sunday afternoon, I made my way uptown to New York Pizza aboard the Magazine bus from Canal Street. A ten minute ride through the Arts and Garden Districts, I enjoyed my view of the artistically restored old buildings that line Magazine.  I got off at Napoleon Street and found the joint by noticing the Statue of Liberty stationed by the front door.

New York Pizza is pretty much a bar–aka Bronx Bar–that serves pie, salads, calzones and a few Italian dishes. They have been around since 1980, and the place seems to be a popular local hang. There is a good-sized seating area inside, but after ordering two cheese slices at the bar ($2.25 a pop), I opted for an outside table to enjoy some late afternoon sunshine. 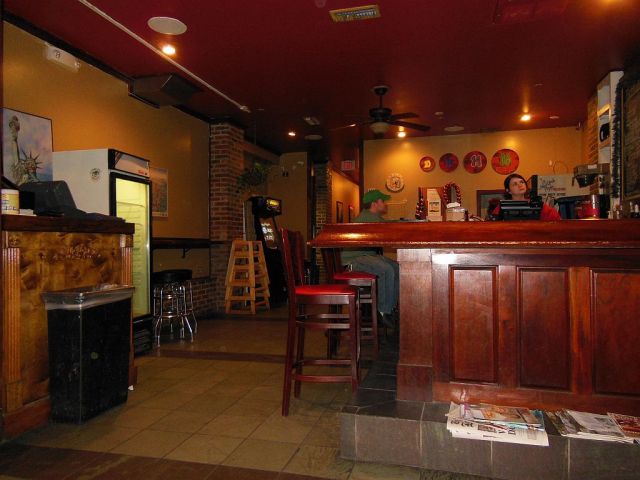 The pleasant waitress brought me the slices nice and hot. At first glance, I noticed an obvious blemish to their classic look:  The crust appeared cracker-like. In fact, it was too brittle to fold without flaking apart. I also had trouble ending my bites due to the cheese not clinging to the crust. These aesthetics aside, the pie had some tasty seasonings marred by a tart tasting tomato sauce. I finished up by doing something I rarely do—leaving the end crust uneaten! I just didn’t care for the flaky texture.

Although I give them credit for serving up the slices in a good classic style and adding some interesting seasonings, I think I would pass on New York Pizza if I were ever again in New Orleans. And don’t count on the Magazine bus on a late Sunday afternoon:  I had to walk four miles back to the Quarter!