In what has hopefully become an annual biz trip, the Pizza Snob got to travel once again to England, his second favorite country. While I certainly did not anticipate matching last year’s home run at London’s Mulberry Street, I was also quite skeptical about whether I’d even find another pizza place worth trying. That was until I found Ecco Pizza on Drury Lane in the Theatre District.

After taking a short nap on the afternoon of my arrival, I set my sights on Ecco based on a favorable, although hyperbolic, on-line review. (Saying that it is as good as Joe’s Pizza in Greenwich Village was a stretch.) Exiting the Underground at Covent Gardens, I proceeded by foot to find the place on my own since I knew that Drury Lane would be easy to find. I eventually found Ecco but not without a challenge.

There are several things that always take time for me to get used to when I am in London: (1) Asking for the “toilet” instead of the “bathroom,” (2) Looking the opposite direction when I cross the street and (3) Remembering that street numbers run consecutively, not odd and even like they do in the States.

So after remembering the third item on my list, I finally found Ecco’s storefront in the middle of a city block. Their outdoor sandwich board sign alerted me that they served an “11-inch freshly baked Italian pizza for £3.50.” They work from a small room with only a few tables for seating, and some people were there getting pizzas to go. I noticed that they also serve a light breakfast and Paninis. 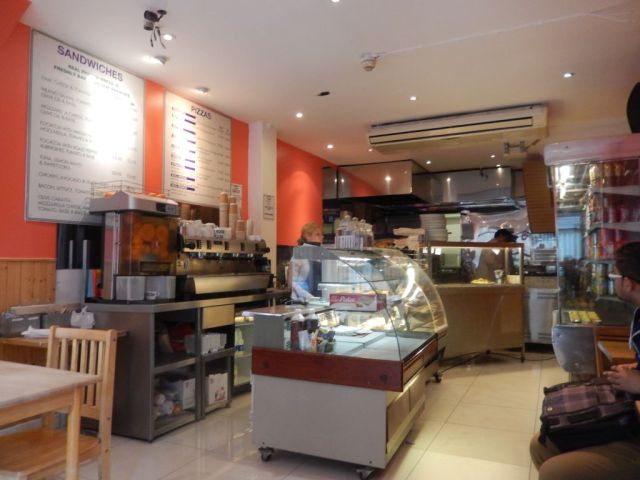 Their overhead sign behind the counter listed about ten or so choices, and I ordered mine Margarita style, the closest they had to just plain cheese. I was also surprised to see that the pies cost 50p more to eat IN than they do to take OUT. Could this be for the dishwasher since I would soon learn that they serve on china instead of paper plates?

Looking back into the kitchen, I surmised that the Italian-looking fellow making my pizza was the owner. He had the look of a proper chef, and my hopes started to rise that I was about to be getting a serious pizza creation. I waited only about five minutes for my pizza to come out of the professional-looking oven and I was not disappointed. 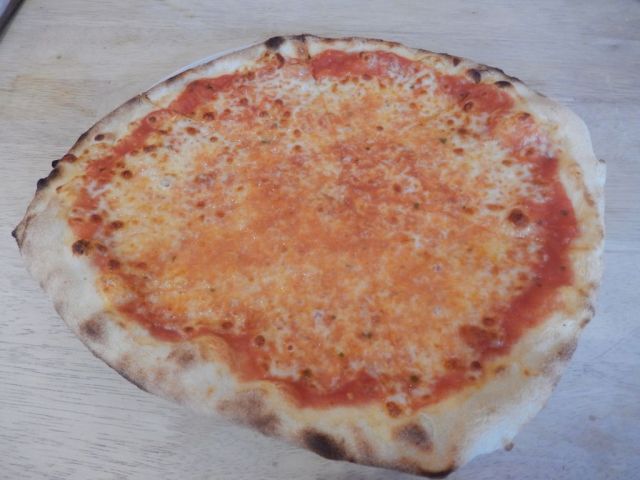 The thinly-designed pizza came served on a china plate emblazoned with “Ecco” and was cut into six small slices. Around the ends, the crust looked light and enticingly charred. In the middle however, it looked like gravity was working against this pie, since the oil was flowing into the middle making its center a little soupy and soggy. Nonetheless, it still proved to be a delicious work of culinary art.

Right away I was taken with how exquisitely tasteful Ecco’s pizza crust was. It was delightfully crunchy and chewy at the same time. It was just the way I like it and could not have been any better. The cheese was tasty as well. My only real dis on this pie was that there was perhaps a tad too much oil which tended to thin out the tomato sauce as well as create the aforementioned soggy middle.

While not a fancy place, if I were looking for a light snack before the theater, Ecco would definitely be on my list. In fact, I think that it is good enough to simply be a pizza destination on its own. While correctly not claiming to be a New York-style pizza, Ecco truly makes a marvelous Italian Margarita pizza. This London pizza adventure has certainly got me excited for my trip to Italy later this year with Mrs. Pie!