Back home in the Pizza State, my brother and I decided to cross the “ever-lifting” Bayonne Bridge to see the Staten Island Yankees minor league baseball team. It’s one of the best Friday night deals around. For twenty bucks you get a box seat, cap, hot dog and a drink. However, if the Pizza Snob is heading anywhere, the first stop is usually for pizza.

I have had great pizza success on the Island where I’ve discovered that they even have their own style of pie. (Can you say crispy and crunchy?) My studies this time led me to a highly-recommended more traditional NY-style place not too far from the Bridge: Brothers Pizza, a big bustling pizza joint with a killer corner location.

While we were waiting on line at the counter to order, I befriended an older gentlemen with whom I talked about all of the great pizza joints on the Island and in the City. This guy (like me) really knew his local pizza, and he thought that Brothers was the best on the Island! Well, it certainly proved to be one of the best.

My brother then pointed out that with three giant ovens and a staff as big as a basketball team, you knew this place was going to be good. The other clue was how crowded things started to get around dinner time. And there was first for me: an electronic sign that scrolled through their selections. (Brothers is cash-only by the way.)

A bit out of character, in addition to my usual plain cheese, I also ordered a square “Grandma’s Slice” (cheese on the bottom and sauce on the top with some basil leaf sprinkles) since I had read good things about it. They were $2.75 each, and both wound up being pretty darn good!

It didn’t take long and both of my perfectly-constructed slices were cooked well to a good char throughout on their bottoms. The plain slice was at a great eating temperature—a trait that the Snob really values. However, my Grandma, despite its reheat, probably should have been served a little hotter. 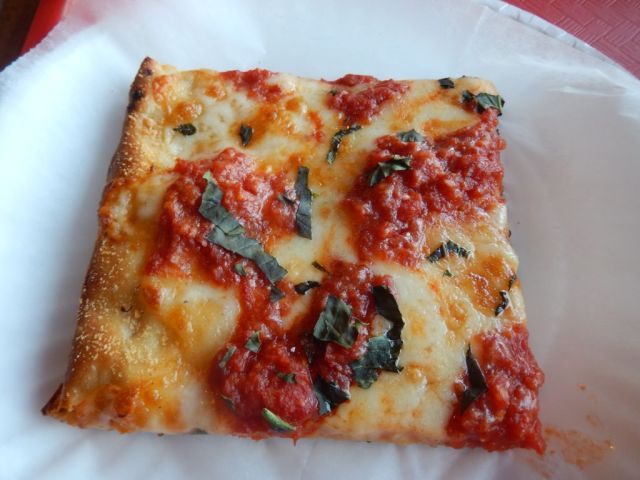 On the regular slice, I did find the end crust a bit plain—even reminiscent of dry white bread. I did hear a nice “crack” from the bottom though when I folded it. Except for that end crust, it was a truly delicious slice. Both the cheese and sauce were primo. The Grandma was quite tasty too. A nice coating of olive oil really gave this one a flavor boost. I also had some good and crispy end crusts on mine.

Brothers is just a good solid pizza joint where you can’t go wrong. They care by not just going through the motions and really make an extra effort to make a great pizza.

Oh yeah—my brother liked it too, although, like me, he did leave his end crusts.

← Porta Via in Franklin, TN—A Certified Neapolitan Pizza Success!
Pomodoro on Spring Street—The Home of the Vodka Slice is a Winner! →