Coming back to Columbus for work duties, I continued my assault on the capital of the Buckeye State. I thought, why not look in the Ohio State campus area? You would think that out of 65,000 students, there would enough who refused to settle for chain pizza and instead support an indie.

Scoping things out, I looked further north on High Street from my last Columbus adventure at Mikey’s Late Night Slice, and came upon A Slice of New York.

Readers may have noticed how the busy Pizza Snob is usually a few months behind in his reviews. It was November 18, 2015 when I made this trip, and in checking the Google, I since learned:

So, since there may be something still in the works for this joint, I will continue with a review rather than kill this one off just yet.

My work bud and I had dinner plans in the hipster downtown District. But, first I dragged him for a quick slice at Slice of NY. How could he refuse such a treat as well as the opportunity to be a part of serious journalism?

I had spent some time in Columbus in the 90s and was surprised to see that Slice of NY was near one of my old haunts: Used Kids Records, a great previously-loved music store. This part of High Street is still as hectic as it ever was. Finding parking on a side street adjacent to the busy main drag on this nasty rainy night was a chore.

This section of town is almost exclusively places where college kids can eat and drink. We found Slice of NY in the middle of the block in retrospect what seems to maybe have been a less than permanent location. Their sign just sat in the window, and the inside décor could best be described as “early concrete bunker.” Goes without saying that it was grungy inside.

They sold four different kinds of slices (in both regular and Sicilian styles) for $2.50 to $3.00 each, and there was some obvious full pie action going on. Warning–this was not a place where you’d take a date after class—it was more of a place to get a pie to bring back to the dorm. (They did not deliver.)

There were a bunch of slices laying out. I went for my customary plain cheese while my mate got one with peps. The dude threw ours in the oven and did one excellent toast-up. He really made those suckers good and crisp. There was a nice char on the bottom, and the end crust nicely cracked when you crunched on it. 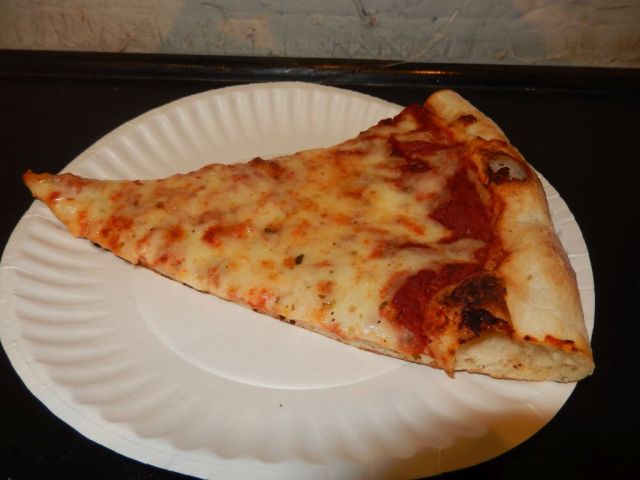 However, it was definitely chunkier than I like with way too much cheese. (My bud also said the pepperoni was too thick.) Also, I can’t say that this was the good-tasting high quality Mozzarella that you would get in New York City. The top was also way too white which meant short on tomato sauce in the all-important blending process.

In a strange way, it was kind of tasty. The oil was on top kept it from being dry, and the tomato sauce didn’t taste so bad either. There was great execution on this one, and with a lessor amount of a better quality cheese, this one would have scored much better.

Let’s see if they resurface in perhaps a more pleasant location as well.