Heading into downtown Manhattan for a night of musical mayhem, I knew of no pizza joints where I could test a new cheese slice. Fumbling around on the Google, I turned to the website of The Slice Harvester, that crazy dude who tried every place on the island that would sell him a slice. Well, lo and behold, despite thinking there was not another decent slice to try in the South Village, I stumbled upon his short inviting review of Rossetti’s Pizza: “This place is awesome!”

Walking through the Village on a cold snowy Sunday evening in January, I soon discovered why I had never before noticed this place. Rossetti’s is tucked away on a short sheltered section of the street on the west side of Sixth Avenue (between Broome and Watts). Angled away and under some trees, you have to be looking for it to find it. I’m sure glad that I did!

Rossetti’s is your typical small neighborhood pizza joint where you can pop in for something quick, or call for a delivery. Their limited Italian menu has no fancy offerings as they state on their outdoor sign: pizza, pasta, hero, salad.

There was a noticeable sigh when I found warmth inside their small square room. I ordered my plain cheeser ($2.75) at the counter on the right (there were six or seven slice varieties on display under glass) and waited at a table on the left. There I joined a small collective who were nursing their slices while mine toasted up in the CPO (“conventional pizza oven”). 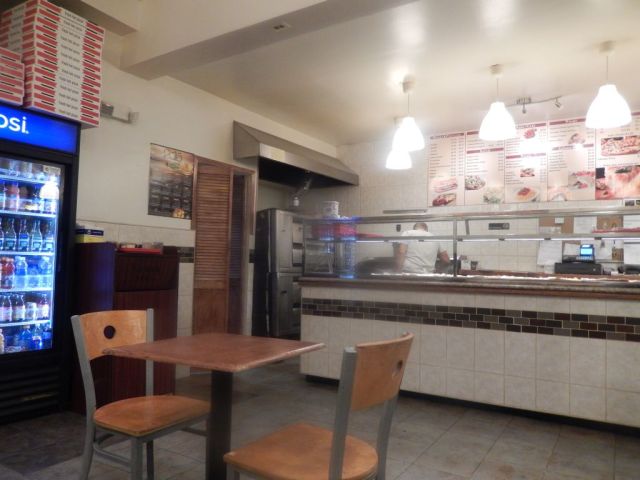 After about two minutes, she was ready. While its looks were promising, I just wasn’t sure that I was about to hit a home run at Rossetti’s. But two quick bites in, I knew that I certainly did without question. This was true cheese slice perfection.

Rossetti’s slice was served up masterfully at the precise eating temperature. The dimensions were right out of the New York slice textbook. As I ate through this marvelous slice, I admired both its crispness and its consistent warmth throughout. The bottom crust was nicely charred from tip to end crust. What really got me chillin’ though was when I got to the end for my self-patented Fold and Rip. After making my fold, the rip was not even necessary since the solid crisp crust simply cracked into two along my fold. Nice!

Both the tomato sauce and Mozzarella were delish, and every bit of cheese held on tight to the last bite. The taste of both made it on their own without the need for any real dynamic spicing.

Delicious, tasting and satisfying. Thanks Mr. Harvester. Rossetti’s is a New York pizza slice at its finest, and I couldn’t ask for more. How could a slice this great be hiding from the Pizza Snob all this time?