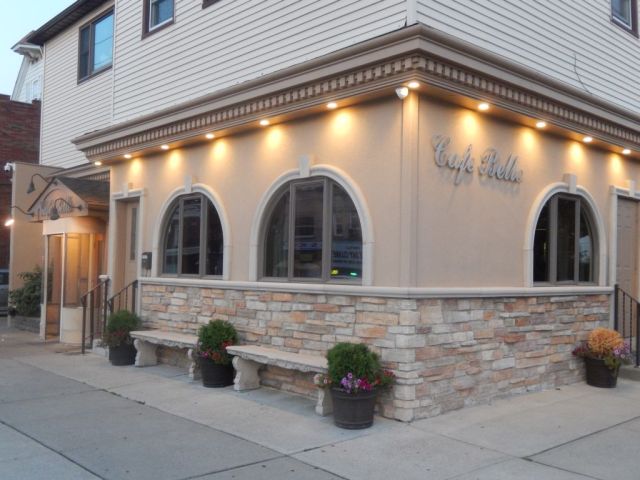 Growing up in Bayonne, my family ate so much Italian food at home and in local restaurants, that you would have thought we were from Roman rather than Russian ancestry. Mom made the best lasagna in Bayonne, and along with veal parm and plenty of pasta, our kitchen always smelled pretty good. Over the last 25 years, when Mom didn’t cook so often, for outside dining, it was hard for us to go anywhere other than the superb casual dining of our fave place, San Vito Restaurant. But, every so often, Mom and Dad felt an urge to go a bit upscale, and that usually meant Café Bello.

Since 1992, Café Bello has been on the corner of Avenue C and 50th Street. Recently, I learned that they have the same ownership as Bayonne’s Pizza Masters. Upon hearing this, I remembered seeing a small brick pizza oven at the end of their bar. Putting these facts together, I propositioned that we make it the subject of our next extended family outing which we did as the summer of 2017 was coming to a close.

My usual rules are to not review places where pizza is just a sideline. However, Café Bello’s kinship to Pizza Masters made them fair game. The plan would be to have one of their brick-oven pies served as an appetizer to our full course Italian meals.

Aside from always loving their food, I find this place to be one of the coziest and classiest restaurants in Bayonne. Entering through the upscale barroom, you could easily think you were in a fancy Manhattan eatery. And, as you take the right turn into the large dining room, there sits the small wood-burning brick pizza oven with the glow of its flame inviting you to sample its output. The beauty of the dining room is captured by the full-wall mural of an Italian seaside scene. All this leads up to an exquisite dining experience.

But, this is supposed to be about pizza. The Bello menu lists about a dozen different variations on its pizza. Oddly, your basic Margherita which the Snob targets, was near the bottom of the listing: a 10-incher for $9.75.

Our appetizing pie came out first as planned and was truly remarkable just to look at. The brilliance of colors coming from the tomato sauce and Mozzarella cheese was simply mouth-watering. The heat from the bricks toasted the crust with a strong solid char that came through to the top of the slender end crust. Although labelled a Margherita, this one was not of the softer Neapolitan variety. Excitedly, this reminded me of the crisper Roma style which was my favorite pie when I visited Italy. The cheese although blotched, managed to cover the entire pie which was cut into small slices. I quickly dove in immediately thinking that we should have ordered two pies for our group of six.

Man! It was fantastic, tasting so good and delicious. Fortunately, not everyone at the table was interested, so I managed to eat three of the six small slices! The tomato sauce took the prize with its rich dark flavor with the vibrant taste of the cheese a strong second. Mixed with a full jolt of olive oil, the overall flavor was magnificent. It was thumbs up by everyone at our table.

Who would have thought that such a magical pizza could be found in Bayonne as a mere sideline to a wonderful Italian dinner? If you want to treat yourself to something special, a dinner at Café Bello is in order. But, by all means, don’t forget this great pizza!