So, of course you are thinking “What in the world brought The Pizza Snob to the village of Port Chester in New York’s Westchester County?” Well, ever since I was a lad listening to New York City FM radio, I heard concerts being advertised at the Capitol Theatre in Port Chester. Thriving in the 70s, shows at this historic venue started to wane and died in the late 90s with local curfew issues one of the factors. However, in 2011 it came back to life, and currently the 1,800-seat room maintains a solid schedule of major touring acts. After all these years, I finally got my butt there to see Elvis Costello & the Imposters.

Being only a short drive north from NYC, I suspected that the city of 30,000 would also sport some good pizza, and I was right. My first choice after doing some homework was Roddy’s Pizza & Salad which had the highest local rating on Yelp (a strong 4.7/5.0). A place about as typical as an East Coast pizza joint could be, I found Roddy’s right in the heart of town. Sitting in a store front in the middle of Main Street, I found a parking spot right across the street and fed the parking meter a buck on my credit card.

I was quite impressed to see, not one, but two pizza delivery vehicles parked in front of Roddy’s. When I walked inside, there was a guy busy making boxes so it looks like Roddy’s sends a lot of pizzas around town. However, there were a few tables and chairs inside that established Roddy’s as what I like to call a “grab-a-slice” place. 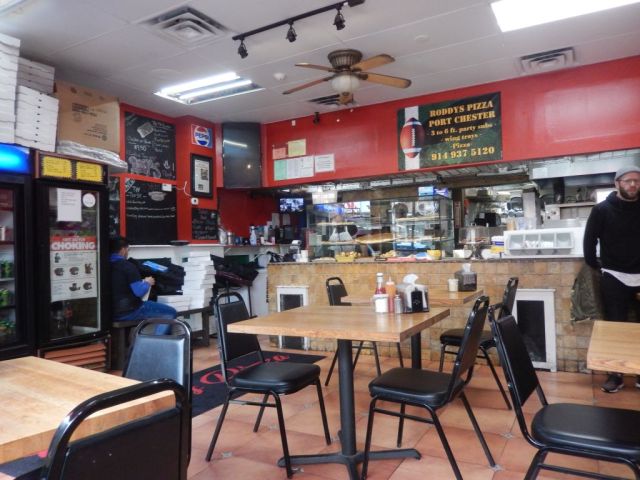 On the early side of lunch hour, I went to the back counter in the large square room and ordered my “PC” (plain cheese) slice. Politely told to take a seat, my slice and a bottle of water set me back only $4. I was surprised that after its reheat of a few minutes, that my slice was graciously delivered to where I went to sit.

Generally-speaking, this great-looking slice was cut to the standard size although it might just have been a smidgen thicker than the norm. It also looked a little lighter in color with perhaps a bit more cheese in the blend than usual. And, before the slice even touched my mouth, its garlic seasoning got my attention. The garlic taste though was right on the money as was the rest of this hot, but easy-to-eat delicious slice of pizza.

While not heavily charred, the crust was cooked right up to the point of being labeled as crisp. While Roddy’s slice wasn’t amazing, it wasn’t ordinary either. All-in-all, I liked it right down to the last bite. It was a good solid slice.

I’m not gonna tell you to drive up to Port Chester to try Roddy’s. But, if you live there, you are blessed to have a local pizza joint as good as this place is.