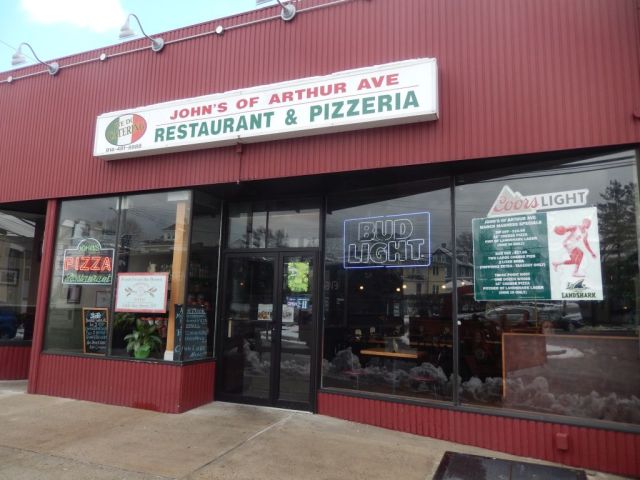 On my recent visit to the village of Port Chester, The Snob really hadn’t planned a pizza attack. In fact, after “slicing” for lunch downtown at Roddy’s, my thoughts had turned to coffee, and I was on my way to a Starbucks for my usual post-lunch cold-brew. However, just before my Waze app could tell me I was at my destination, I spotted a kind of shiny new-looking sign for John’s of Arthur Ave.

Honestly, I had never heard of John’s, but I was familiar with the famous Arthur Ave. Although I have never been there, the so-called “True Little Italy” in the Bronx has long been on my bucket list. So, without hesitation, I pulled in to the adjacent strip center parking lot to see what this John’s had to offer.

Before making my way inside, I took a moment to snap my usual storefront photo got nabbed! As soon as I entered, the curious owner inquired about what I was up to. My talk about just being a tourist and pizza fan wasn’t working, so I stopped being coy and outed myself as a pizza blogger. 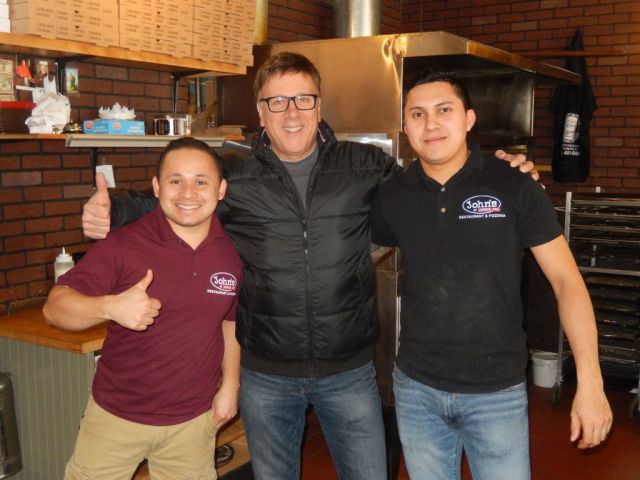 In the end, I was glad I did since the owner was quite a fine fellow. While my plain cheese slice was being reheated, we chatted about pizza as well as the real musical reason I was in town. This talk led to discussing the Grateful Dead’s Jerry Garcia’s ghost that supposedly looms over my evening’s legendary destination, Port Chester’s Capital Theatre.

About John’s I was told that he and his son had bought the famous pizza recipe from the original folks in the Bronx and used it to open a couple of places. I really didn’t push him for any other business details, but obviously this also allowed the use of the name. Something else that didn’t come up which I later learned was that the original John’s in the Bronx closed as recent as late 2016. My follow-up googling found three other Arthur Ave John’s of his possible ownership: Hartsdale, NY, Middletown, NY and Milford, PA.

My slice soon arrived, and I took it back to a table in the lovely-furnished large room to inspect and consume. Looking now at the slice photo I had taken, I realize this is one of the most beautiful pizza slices I have ever seen. Of course, looks aren’t everything, but taste-wise there was nary a thing that disappointed me about this incredibly-delicious slice. How a pizza recipe can live on like this is a blessed miracle!

The slice was big, but while it was long, it was also lean—just the way I like it. The thing about this one though that knocked my socks off was the absolutely-sublime tomato sauce. Wow! It was so rich and flavorful, it really made the whole slice shine. It goes without saying that the cheese and crust were also fine. The slice was coated with a nice layer of oil and both its temperature and crispness were spot on. I was able to close this one off with a perfect Fold & Rip.

Remaining as objective as I could after meeting the owner, there was no doubt that I loved this slice and can only label it as perfect! I’m sad that it looks like I will not get to experience the namesake John’s in the Bronx, but if you are ever near one of these other locations carrying on its flame, don’t pass up the opportunity. If I lived in Port Chester, I’d be wearing this place out!