My whimsical idea of eating “snack bar pizza” at the Grand Canyon like I did a few years ago at the ruins in Pompeii, never happened. My pizza expectations at our next Arizona travel stop, Sedona, were equally as non-existent as they were at the Canyon. Being sort of a “foodie” town, I did spot a few wood-fired pizza places around town, but none that piqued my interest.

However, when our breakfast host gave us directions to the off-beat, but spectacular, Rachel’s Knoll viewing site that included “take a right at the pizza place,” I knew that I wouldn’t be able to resist. Especially, when its name was “Famous.”

So, on our morning journey, we passed Famous Pizza & Beer just off the highway with plans to check it out on our return. I did just that with Mrs. Pie dropping me off while she grabbed some groceries nearby and I went for a pre-noon slice. Nowhere finding any validation as to why they claim such a bold name, I did however see that they had another Sedona location and one in Flagstaff. 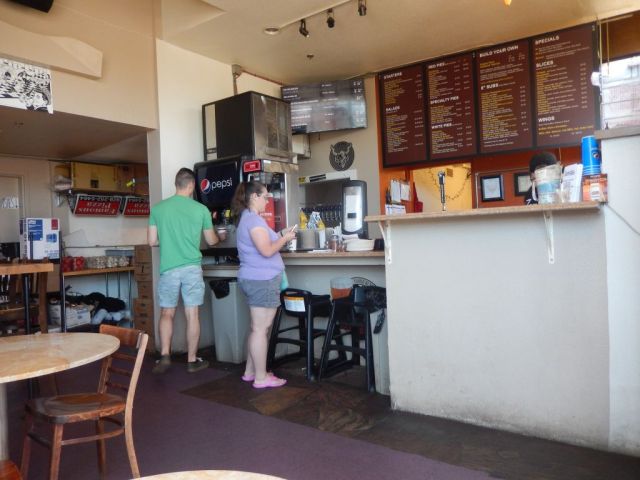 I went inside to their small room where they occupied one side of a small commercial building complex. I ordered my plain cheese slice ($2.75) and took my number of “95” to a table inside where I waited. Although there was also outside seating, I remembered that I was in Arizona. I was quite surprised how busy Famous was at 11:30am with most of the outdoor seating taken regardless of the heat.

While waiting, I noticed that they had available some rather exotic beers, including Chimay, a Belgian Ale made by Trappist Monks. Now that sure is a first for a pizza joint! (But, believe me, that’s not nearly the strangest thing you will find in the “spiritual Disneyland” of Sedona.)

Despite the crowd, I got my slice pretty quick. Advertised as being “thin and crispy,” I certainly wouldn’t go that far in describing it. I also seemed to have drawn the short end of the straw with a slice much smaller than the others I saw being dished out.

Nonetheless, it was tasty and satisfying in terms of all three main ingredients: sauce, cheese and crust. Oddly, the tomato sauce was a bit clumpy, but otherwise it had a good rich taste to it. The slice was a little bit oily, and the cheese was adequate and nothing to rave about. The crust was a little thicker and less crispy to my liking.

So, not a bad slice, but nothing fancy and nothing special. All in all, it’s great for a city so far away from New York Style pizza country to have a place like Famous. One that is so much better tasting than the national chains.  Quite a noble effort, but not for a pizza fanatic.

← Flagstaff’s Pizzicletta – Put It on Your Pizza Crust Bucket List
Pizzeria Bianco in Phoenix– Yes, You Need to Go There! →