Gambling bores me which means that AC trips with Mom and Dad are usually nothing more than another excuse to try some new pizza joints. Last year, I busted on the Boardwalk while earlier in the day I fared much better at Jonuzi’s. Finding room in my gut for some more carbs, I walked north on Atlantic Avenue searching for Tony Baloney’s. I wasn’t expecting anything special after viewing their website where I saw that they also have a location in Hoboken.

After crossing several streets with names from the Monopoly board, I found Tony B’s tucked away in a rather isolated section of town. Their food area took over the bottom floor of what looked like an old beach house. While the windy day emptied the outside picnic tables, business inside the room with a “beachy” feel was rather brisk.

As I lined up at the counter, I spotted a chalk board listing a dozen or so uniquely named specialty slices under the heading “Indigenous AC Style.” My pick was the most basic one at the very top called the “Old Man Brooklyn.” Its description (fresh mozz, marinara, pecorino and basil) sounded very much like something I would find in my second favorite New York City borough.

The slices sitting on the counter were all of the more adventurous variety, so I was forced to buy a full 12-inch pie which cost me $13. I ordered it to go with plans of eating a few slices on site and bringing the rest back to the hotel. Due to a misunderstanding, I missed their call, and sadly my pie sat atop the oven until I asked about it. As a result, it wasn’t piping hot, but I managed to catch it at the perfect temperature for safe eating. 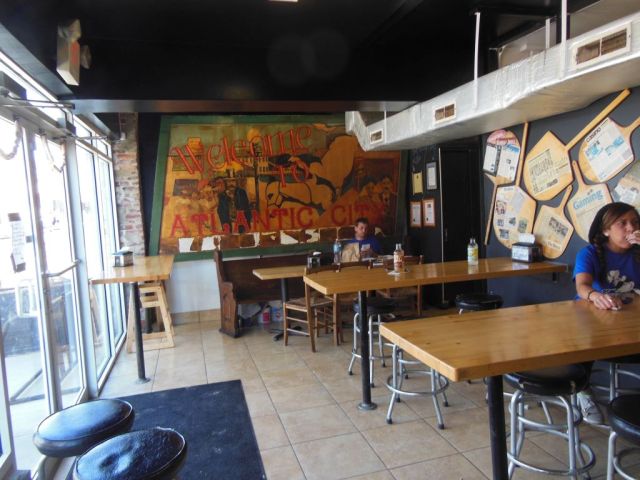 Tony B’s pizza had me right from the first bite. A word I don’t get to use often enough to describe pizza is unique, and this one certainly was. Crafted in a basic Margherita style (blotchy cheese melted from cubes), what truly set this pie apart was by far the tastiest tomato sauce I have ever had. It was dark rich and boldly delicious, bordering on being sweet. The pie crust was delightfully chewy without being overly crisp. A pinch of basil and a sprinkling of pecorino were the perfect touches atop the tasty Mozzarella. These ingredients came together to produce an absolutely wonderful flavor extravaganza!

I managed to eat three slices on site before bringing the rest back for the family. They loved it as much as I did! While Tony B’s pizza isn’t the classic New York-style that you expect to find at the beach, it is one excellent pizza worthy of the Snob’s highest award.

Tony Baloney’s offers real character and charm in addition to a uniquely world-class pizza. If you find yourself in AC, I encourage you to take a break from the gaming tables and pay them a visit. They are a guaranteed winner!