My first pizza adventure in Atlantic City was a big bust on the Boardwalk. So this time out, I put my car in the Park Place and set out to the city streets in search of something better. Monopolizing a beautiful spring Sunday afternoon, I took the short hike from my stay at Caesar’s Palace to Jonuzi’s Pizza, one of the more recommended local places on the web.

Around since 1993, Jonuzi’s store front is in a fairly active commercial district that offers some tough competition. There are two local pizza joints directly across the street! I found Jonuzi’s to be fairly typical of a Jersey joint: a small room with Formica booths and a menu of pizza and subs. With a nod to HBO’s Boardwalk Empire, a sign offered some specials named after the show’s characters. (Anyone in the mood for a Nucky’s Special?) They also deliver. 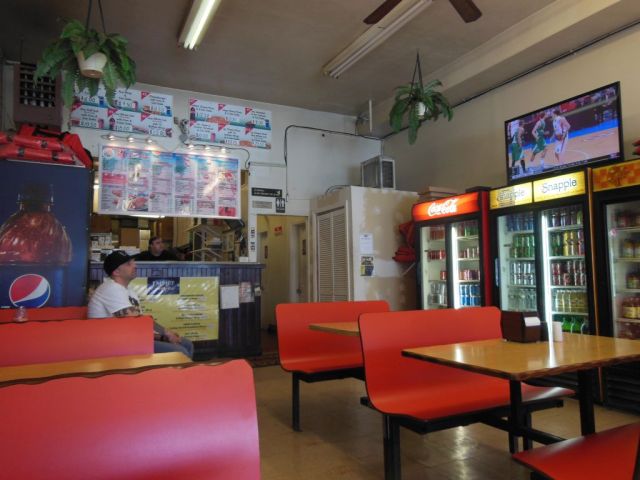 With no pizza visible, I really was not sure what I was in for at Jonuzi’s. Seeing that a single slice would set me back $2.75, I thought I was about to be paying the Luxury Tax for being in AC. When I saw the size of my slice (plain cheese of course), my jaw dropped—that sucker was big. It was at least a foot long and was served across two standard white paper plates. It clearly rivals Hoboken’s legendary Benny Tudino’s for serving up the largest slice in the Garden State. I asked the chef how big a pie it was cut from to no avail. He either didn’t know or was too busy on his iPhone to tell me.

The slice was constructed very well despite being oversized. Cheese, sauce and crust all checked in at the right quantities. It was oily–evidenced by the drain on the plates–but it turned out to be quite pleasant tasting on the tongue. Overall this was a delicious slice, gently seasoned with some oregano. The crust was crisp, and the cheese hung on just right without any slippage. There was a mild musty aftertaste that I am not whether it came from the cheese or the crust. Was it a lack of freshness that made this a less-than-perfect experience?

I didn’t have the time or appetite to test the competition across the street. Taste and value wise, though, I think I made the correct choice. I’d go back.