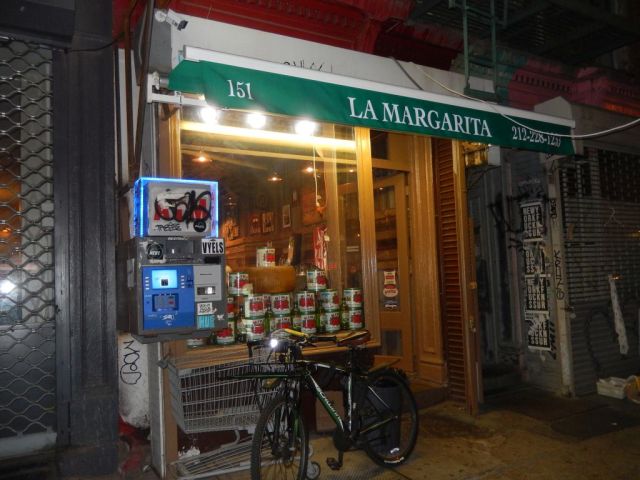 Exploring the Lower East Side on foot, I knew that sooner or later I would find a new pizza joint to sample. I eventually stumbled upon La Margarita on a darkened and cluttered section of Ludlow Street. With a name like theirs (which I had last seen at a popular Mexican restaurant in San Antonio) I for sure thought I’d be getting a “Margherita” slice like they serve on the other side of the East River in Brooklyn. However, it turned out that I had actually found another great neighborhood New York-style slice.

Inside, the tiny sparsely decorated room was cozily lined with brick walls and wooden floors. (A look reminiscent of Champion Pizza just a few blocks away in Soho.) The front window was invitingly lined with cans of fancy-looking tomato sauce. 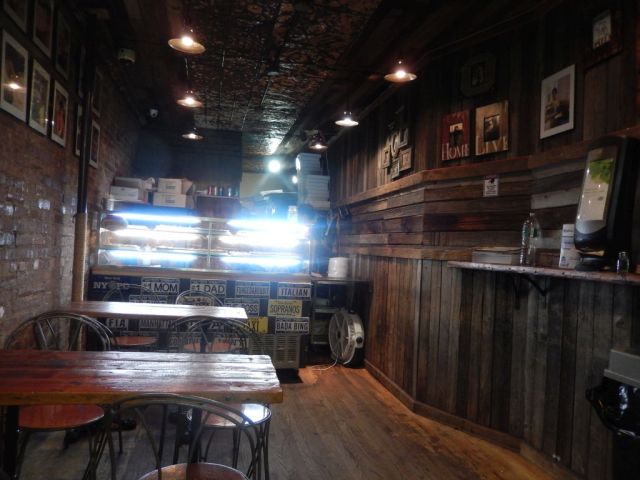 At the counter there were in fact some Margherita slices on display. However, when I asked for a “plain slice” ($2.00) I was surprised that I didn’t get one of those, but a regular NY one that was stored under the counter. Hmmm!

After a reheat of less than a minute, my slice was delivered at a comfortable eating temperature. It was very economical in both cheese and crust content. The char on the bottom looked good, but not great. Being only slightly brown, I was surprised that it turned out to be much crisper than I suspected. There was also more oil on top than usual. After diving in, my first reaction was that while packed together real well, LM’s slice just didn’t have anything special in the flavor department.

Any stranger to the City would love this pie as would someone in the neighborhood looking for something good close to home. But, while La Margarita’s slice is quite good and tasty, it is just nothing worth going out of the way for if you find yourself in the pizza capital of America.