It only took three years for the Pizza Snob to finally get to Juliana’s Pizza, Patsy Grimaldi’s much-ballyhooed return to the pizza biz. Located underneath the Brooklyn Bridge, along with his namesake Grimaldi’s and the unheralded Ignazio’s, this last leg of the Brooklyn Pizza Triangle truly lived up to my expectations. It was fantastic.

As every Brooklyn pizza fan knows, Patsy opened Juliana’s back in 2012 on the site of the original Grimaldi’s. He had long ago sold the place, and it had since moved to a larger old bank building down the block on the corner of Old Fulton Street.

One Wednesday night, Ms. Pie, my boss from my real job and I, made a long traffic-snarled journey from Jersey for an early dinner at Juliana’s. Being early, the Pizza Angels were with us and we got both a parking spot right in front ($2 for 2 hours) and instant entry right through the front door without a wait. (When we left, there were at least 25 folks on line out front and no one waiting for Grimaldi’s.)

I had never been to the original Grimaldi’s back when it was on this spot, but I can’t imagine it being as clean, slick and modern-looking as this new place. It’s not a very big room, and probably fits no more than 50 at a sitting. The coal-oven and pizza-preparation in the rear open is open for full viewing and entertainment. 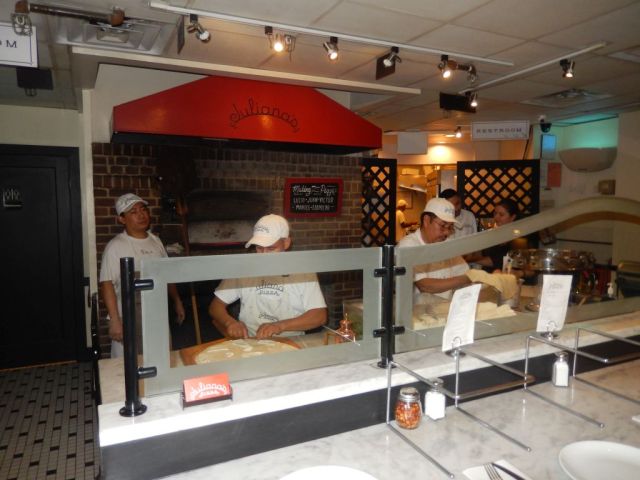 This being Brooklyn, we are of course talking about a coal-fired Margherita pizza. I loved how the waiter first comes to your table holding cardboard cutouts of the two available pizza sizes: large ($20 for 18 inches) and small ($17 for 16 inches). The three of us chose to split a plain big one after first feasting on some first class salads (something you can’t get at Grimaldi’s).

The pizza was absolutely wonderful like I knew it would be. What stood out most to me aside from that delightful coal-flavored crust, was the amazing Mozzarella cheese that was so soft, fluffy and delicious. Biting in, the flavor rush of the tomato sauce, oil and cheese was simply mouth-watering. The crust on the bottom was a bit thinner than I expected, but had a good solid char throughout. It was good and crisp, and the scattered burnt spots on the bottom actually turned out to be the tastiest parts.

Gosh—this place was so good and deserves to be on every pizza connoisseur’s bucket list. And of the three spots on the Brooklyn Pizza Triangle, Juliana’s gets my vote as the best of the bunch. Patsy, we are so glad you came back!