Reuniting with old high school friends can be fun. Especially when they share my mutual love for music and pizza. My old friend Big Jim was absolutely ecstatic that I try a place in the Jersey City Heights that dates date to 1959: Renato’s Pizza Masters. (No affiliation with Bayonne’s Pizza Masters.) On my list for some time, all it took was a nice summer Saturday afternoon to get my brother and I to make the short drive up Kennedy Boulevard from Bayonne.

We crossed over to Central Avenue which runs parallel to the Boulevard. It’s an old-fashioned street of mostly local retail shops, and was quite a happening place on a Saturday afternoon. Just a few doors down from the police station, the crowded city streets led us to find a spot in Pizza Masters’ rear parking lot. 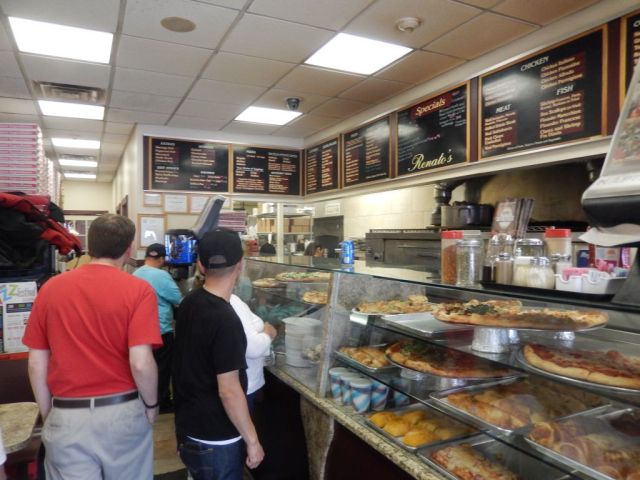 We walked around and entered from the front where the place looked like your usual Jersey pizza joint. I later noticed that they offer a finer dining experience (“Casual Dining, But No Tank Tops”) in a rear room that when open, can be entered through the back parking lot. I say this since another JC friend of mine (who usually rides as a passenger and entered once each way) only recently found out that these weren’t two different restaurants!

My brother and I were hungry to say the least, and we walked up to the plentiful pizza counter to stake our claims. I ordered both a plain cheese ($2.00) and a Sicilian slice. Desperately craving some protein, I went all out and added a chicken parm sandwich.

Pizza Masters was a place where you knew right away that the pizza would be tops. Man, was my slice good, tasty and served on the hot side! (I still had a sore mouth from my recent Louie and Ernie’s experience.) The tomato sauce and Mozzarella were just primo. There was some oily cheese slippage (likely from still being so hot), but it was not enough to hold it against them. The crust was not overly crisp or charred, but just right. I think my brother summed it up best when he said “It’s a good damn slice.”

My square Sicilian was cut from the same stock as the regular. It was deliciously huge, and I did pretty good scoring two good edges of nicely charred crust. I will say that I liked it better around the ends than in the fluffy middle. The chicken parm was excellent as well and sent me to naptime as soon as I got home.

As their name implies, Pizza Masters knows how to make a perfect slice of pizza. This is definitely a “go-to” place for any pizza aficionado. And based on what we had in the front counter room, I would suspect that the rear dining room is also something special.