In 2002, noted pizza authority, Ed Levine, wrote a piece in the New York Times about the six best slices of pizza in the five boroughs of New York City. Yours truly took this tome as the launch of a personal quest to visit them all. Having already tasted Di Fara Pizza, Joe & Pat’s, Patsy’s, Joe’s Pizza and Nunzio’s, all that remained was Louie & Ernie’s Pizza in the Bronx. Well, the Pizza Snob can now claim to completing the Levine list and can comfortably say that Ed got it right.

Complicating my trip to L&E’s was the fact that I know so little about the Bronx. In fact, outside of visiting the Zoo when I was a kid, my only previous travels there have been to Yankee Stadium. So, with an invite to a Yankee game by a pizza-loving business associate of mine, the stage was set for us to dine on some pre-game pie in the Bronx.

Leaving midtown Manhattan late afternoon, getting to the Bronx was a traffic nightmare: a 90-minute $75 Uber ride that made us regret not checking out the train. Not knowing what to expect when we got there, I was quite shocked to see the small storefront joint on the corner of a rather cozy and comfortable residential neighborhood. In fact, the only other bit of commerce in sight was an Italian ice and coffee shop next door. The corner street sign boasted the honorary name of “Ernie Ottus Square,” something I had seen before in Staten Island for one of its legendary pizza joints. 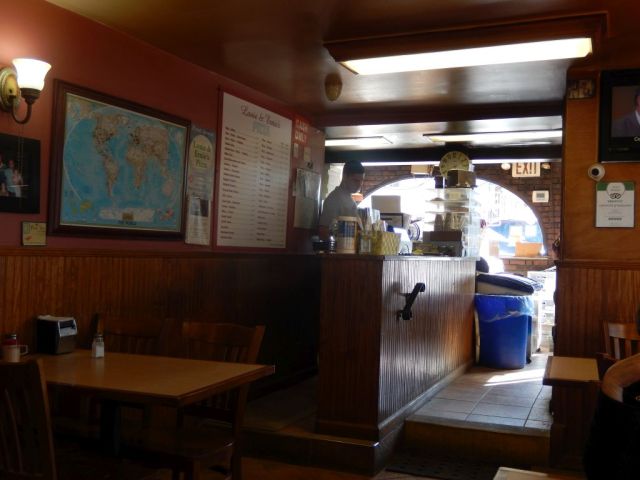 Arriving just before 6pm, we walked through the narrow area past the front counter and took one of the tables in the back. A glance to the rear revealed an open door to a small outside patio area that just seemed too hot for today. I noticed the menu was limited to pizza and calzones—not even a salad. They do serve beer and wine.

Those who know me know how I stick with plain cheese slices. But, after reading all the praise about their sausage pie, I had to give it a taste. So my friend and I ordered a large cheese pie with half sausage so I could at least try one slice that way. (The large cheese is $15 while the large with sausage is $19, so we paid somewhere in the middle.)

When our pie arrived, I was ready to give it five stars without even taking a bite. By look and smell alone, I could tell this was a classic. I was a bit shocked though when our pie was delivered with a knife and fork. Was this meant as a joke?

Pushing the knife and fork aside, I grabbed a slice and it didn’t take long for me to label this pizza as absolutely fabulous. I had the same opinion on my second slice which this time included the tasty local sausage. The tomato sauce was dark and rich, and while I would call this an oily slice, it seemed just right. The traditional mozzarella cheese and thin crust were perfect. Each crisp and crunchy slice made for a perfect Fold & Rip. The sound of the crust cracking with my folds was music to my ears. Served somewhat on the hot side, I proudly left with a gentle reminder on the roof of my mouth.

There was nothing left on our plates, and I easily surmised that Louie & Ernie’s was one of the best traditional pizza places I have ever visited–perfect ingredients perfectly put together.

You know how I know that this was a great pizza? It’s now two months since I visited Louie & Ernie’s, and if I think about it, I can still taste how delicious it was—especially that delightfully salty sausage.

P.S. Make sure your visit to Louie and Ernie’s finds you with one of these neat $5 tee-shirts! 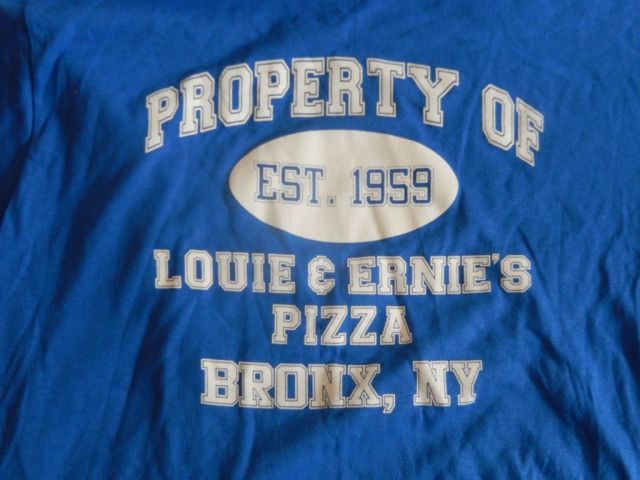