Amore Pizzeria in Flushing, NY—A Decent Slice on the Island

Manhattan is undoubtedly the center of the New York slice universe. This is of course no surprise since it was on this great island that the most magnificent food known to mankind was created. It is also no surprise that this delightful delicacy would eventually spread not only throughout the city, but to the vast territories to its east and west as well.

Having grown up on the left side of Manhattan in New Jersey, from birth through my current tenure as the Snob, I have found great pizza all over the vast territory I like to call the Pizza State. However, as my recent discoveries have been uncovering, there also seems to be an equal amount of pizza potential in Long Island on the right side of Manhattan.

Back home recently, I made plans to try a few places on the Island after landing at La Guardia Airport. After browsing both Google and Yelp, based on some good reviews along with its proximity to the airport in nearby Flushing, I picked my first stop, the once quite popular Amore Pizzeria & Restaurant.

The recent on-line reviews of Amore had a common thread. Most thought the place used to be great, but under new ownership, the prices were raised, and the pizza just wasn’t what it used to be.

Despite the seemingly always traffic in this area, I expresswayed my way over to Amore just a few minutes away from LGA after passing both the Mets’ home at Citifield and the former site of the 1964 World’s Fair. 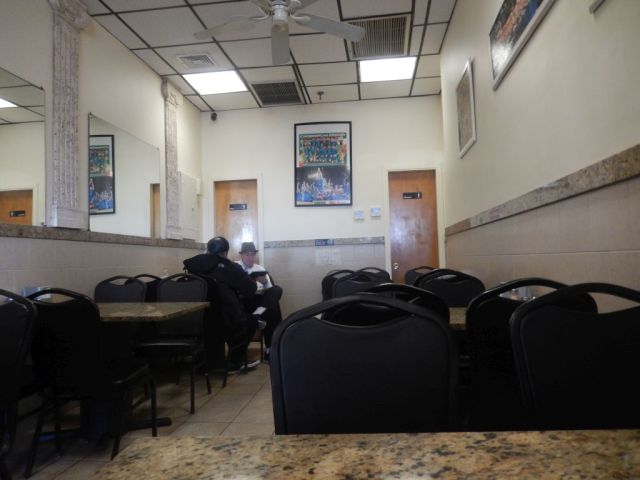 Amore is smack dab in the middle of a long strip center just off the highway. Fronted by a Stop & Shop, the center had everything from a McDonalds to a Dunkin Donuts, and the massive parking lot in front of the pizza shop was close to capacity. It was now long past a working man’s lunch hour so there were only a few pizza patrons inside.

Amore is your usual pizza place. You’ve seen it before—counter to the right as you walk through the door and tables in the rear. The folks behind the counter were quite friendly, and I wasted no time in ordering my customary single plain cheese slice ($3.00).

Lucky in my timing, I received a fresh slice right out of the oven that didn’t require a reheat. My slice looked as about as all-around correctly proportionately-sized as one should be. It was quite a looker until I notice some cheese overhang on the edges. Did I need to let it cool down first since it just left the oven? On the other hand, why should I have to? Pies come out of the oven at a place like Joe’s Pizza looking perfect and require no wait? This one here was slippage waiting to happen.

The slice wasn’t overly hot but was semi-dangerous to the roof of my mouth. Right away, the cheese started to move, and oil began dripping all over my plate. Not good. The slippage was so extreme, that when I did my Fold & Rip, one half of what remained was completely barren crust.

Construction comments aside, how did it taste? Well, while it certainly wasn’t horrible, it wasn’t amazing either. Just sort of average, adequate and unexciting. Getting a little more specific, the crust was crisp and firm, but uncharred. The cheese and sauce were nicely blended and tasted fine but were nothing spectacular.

In Des Moines, this slice would be a hit. But here in Queens, just off the center of the pizza universe, it’s nothing to go out of your way for.