This latest Pizza Snob lead came courtesy of musician Richard Barone who wouldn’t know me from the Man in the Moon. A DJ pal of mine (listen to his great “Pop Top” show on-line every Friday at 5 pm Central) who is friends with Barone on Facebook pointed me to his direction. Barone was the leader of the great Hoboken band The Bongos. In 1997 as a solo artist, he released a chamber-pop masterpiece entitled Cool Blue Halo that was recorded live at New York City’s The Bottom Line.

Barone’s lead sounded promising, although I was initially surprised that someone would spotlight an NY-style slice place so close to Snob Hall of Fame spots like Joe’s Pizza and Bleecker Street Pizza. Nonetheless, I made Rivoli Pizza Restaurant a target on my latest trip back to the City.

Rivoli sits right next to the famous Village Vanguard jazz club on busy Seventh Avenue. You can forget about parking nearby, so my Bro was out-of-luck. He had to just let me out of the car to grab a quick slice. Their sign boasted “Pizza*Pasta*Heros*Burgers.”  This joint looked about as classic as an NYC “street-slice” pizza place can get. Rivoli’s also offers wine and beer in addition to one of my fave treats—Italian Ices.  (I’m partial to cherry.) Noting an ATM inside, I failed to check, but I reckon they may be cash-only.

A plain cheese slice set me back $2.50. Since the doors were open on this lovely spring day, I opted for a pleasant sit-down pizza-eating experience in their small room while Bro circled the block. After about 3 to 4 minutes reheating in the big oven, my slice came out as it should–piping hot. I was a little surprised that its end crust looked thicker and wider than the norm.

All the way through was a fine slice of pizza—crisp and tasty right down to the extra crust on the end. I enjoyed eating every morsel. Making a slice otherwise trim and thin, Rivoli is a perfect purveyor of the Snob’s should-be-patented “Fold and Rip” technique. I did experience a little cheese run-off which was likely the result of my impatience in not allowing for the proper cool-down that a slice this hot requires. 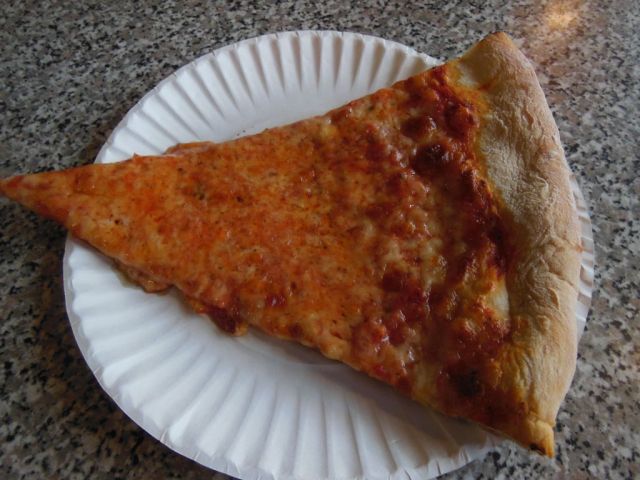 The busy-ness happening at Rivoli said it all—this is a great place for a slice. I have now found the third leg of what I will dub the “Greenwich Village Pizza Triangle,” consisting of Joe’s, Bleecker, and Rivoli. These are three perfect, classic NY-style slices that won’t steer you wrong.

A few weeks later, I came upon Rivoli Pizza II while walking over on Hudson Street. I’m not sure of its connection with this Rivoli, and I will give it a try at a later date.

Thanks go out to Richard Barone for the tip. This guy knows his pizza as well as his pop!